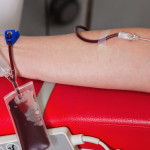 In late June/early July of 2005 I went to give blood for the first time. Since this was my first time, I was a little nervous because I HATE needles and I thought it would be painful. My wife, who was with me, assured me it was no big deal.

We both sat down and as the nurses began outfitting us for the donation, my nurse paused, turned to another nurse and asked her if she could check my heart rate. My nurse had this nervous look on her face. This wasn’t what I was expecting. “I knew I should have never agreed to give blood,” I said to myself as I sat there in utter fear.

The other nurse checked my heart rate and then turned to my nurse and said, “I’m detecting an abnormal heart rate, are you?” My nurse said she detected the same thing.

My nurse apologized that she couldn’t take my blood because they weren’t allowed to take blood from people who have abnormal heart rates. She advised that I see a doctor. She tried to assure me that it probably wasn’t anything serious but I should get it checked out anyway. Gee thanks.

My wife and I were both stunned. I left the blood donation room and waited outside for my wife to finish. At that point I was just pissed that I had finally gotten the courage to give blood and then they wouldn’t accept me. What a bunch of bullshit, I thought to myself.

When we got home I made an appointment with my doctor, Dr. Mark Rector of Sioux Valley Clinic (now called Sanford Health) just to make sure there wasn’t anything I needed to worry about. The next day I had my appointment with him and I described what happened. He was as perplexed as I was because all my vitals were perfectly normal and I was 100% healthy – and yes, my heart rate was perfectly fine. He thought, however, since this was my heart we were talking about I should probably see a cardiologist just to be sure.

About a week later I met with a cardiologist, Dr. Jihad Khalil of Sioux Valley Hospital (now called Sanford Hospital). This was not a fun appointment. Here I was, 33 years old and I was seeing a CARDIOLOGIST. Are you kidding me? This must be some kind of joke. I was pissed off to say the least. I was too young to be seeing a cardiologist.

The cardiologist I met with had the same reaction. What was a young, perfectly healthy guy like me seeing him for? Since I had no symptoms and was perfectly healthy he couldn’t tell me much at that appointment. He chalked it up as possibly nerves and anxiety that triggered a temporary irregular heart rate. He said if I wanted, I could have an echo and a stress test done just to be sure.

Being the hypochondriac that I am, I reluctantly agreed. If I was dying, I wanted to know. Yes, that was my thought at that moment. When it comes to health scares like this, I always assume the worst. When I get a headache (I rarely get them), I automatically assume I have a brain tumor. Such is the life of a hypochondriac.

I had the echo and stress test done a couple weeks after that initial appointment with my cardiologist. The technical term of the stress test was the Bruce protocol stress test. This is where they hook you up with a bunch of wires to monitor all your vitals while you run on a treadmill at increasing intensities. Prior to the test, they do an echocardiogram. Here is a video that shows you what these are all about (and what to expect if you ever have these done):

I remember during the test the technician and the cardiologist (yes, my cardiologist was there for the test which I understand isn’t always the case) kept on commenting on how they couldn’t believe how long it was taking for me to reach my maximum heart rate. At that time in my life, I was an avid treadmill runner and I lifted weights regularly so I was in pretty good shape. My resting heart rate during this time in my life was 45 bpm.

As my cardiologist predicted, everything checked out fine. For those of you that are interested in the technical results of the tests, here they are (copied word-for-word from my test results):

Stress Test:
The patient underwent a Bruce protocol stress test. The patient completed 15 minutes of total exercise. The patient achieved 17 METS of total exercise and 91% of maximum heart rate predicted. He was asymptomatic throughout the test. The 12-lead EKG at baseline showed no ischemic ST-T changes. At peak exercise, there were no ischemic ST-T changes. He had frequent PVC’s in stage IV, however, he had no further arrhythmias.

My cardiologist concluded that I was, “very healthy cardiovascular wise and that my risks of any cardiovascular events in the future were very minimal below most likely the same or below the average of any person his age and in his condition.”

You’ll note that during all of this, not one nurse, doctor, or technician mentioned atrial fibrillation. At this point in my life, I had never heard of it so I didn’t even think to ask about it. It didn’t dawn on me that my first afib episode might be somehow connected with the episode I might have had at the blood donation center.

I say “might” because to this day I’m not convinced I was in atrial fibrillation when I was trying to give blood. As you’ll discover in my future posts, my afib episodes are very prominent and stubborn. I wasn’t feeling anything that day I was trying to give blood. I suspect I might have had some faint atrial flutters due to my nervousness and the blood nurses just happened to catch those, but who knows what they detected.

To this day I have never given blood. Quite frankly, I’m too scared to now. It’s more of a superstitious thing for me. I keep thinking if I give blood I’ll end up seeing a cardiologist again.