You are here: Home / My Afib Journey / Am I Magnesium Deficient? My EXA TEST Results Are In!

But magnesium isn’t just important for afibbers. It’s important for everyone. Magnesium is responsible for over 300 enzyme reactions in the body and is the second most abundant element inside human CELLS. I’m emphasizing the word “cells” for a reason as I’ll explain shortly.

If you have atrial fibrillation, one of the first things you’ll want to do is test your magnesium levels. As I mentioned, there is a very good chance you’ll be low in magnesium!

Most doctors will recommend a simple serum magnesium test. The blood serum test is the most common magnesium test available. Unfortunately, the results from this test are virtually meaningless.

I have had the serum test done twice in the past couple years. I had it done first in early 2013 because at the time I thought it was the only test available and I assumed it was accurate. After all, why would my doctor give me a test that produces virtually meaningless results? I’m still asking that question today.

I had the serum test done again in January 2015 even though I knew the results would be meaningless. I was just curious if my magnesium levels were higher or lower from the time I took the test in 2013.

Here are the results of my tests: 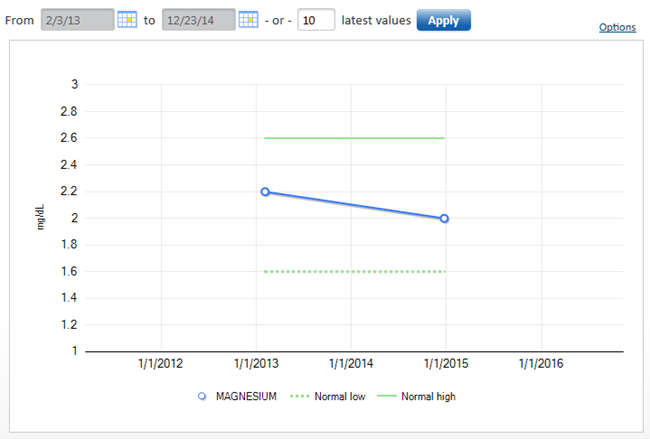 If I didn’t know any better I’d look at these results and be relieved that magnesium wasn’t a contributing factor to my afib. In fact, my doctor wrote a note to me when he sent the results saying, “Your magnesium levels are normal and not a cause of your afib!”

My doctor couldn’t have been more wrong.

I learned about the EXA TEST in 2014. It tests intracellular mineral electrolyte levels and is considered the gold standard for magnesium testing. It gives you a true and accurate picture of your magnesium levels because the magnesium is measured in your cells where 99% of your magnesium stores are.

In addition to giving you an accurate picture of your magnesium levels, it measures important electrolytes at the cellular level. And as any afibber knows, a proper balance of electrolytes is essential for the heart so this is an incredibly important test to have done if you have atrial fibrillation.

Unfortunately, it’s not easy finding a doctor that knows what the EXA TEST is let alone one that offers it. I searched in vain in 2014 and couldn’t find a doctor that knew anything about it so I gave up on it for a while.

It’s also not cheap and most insurance plans won’t cover it unless a doctor actually requests one.

Finally in March of 2015 I found a naturopathic doctor in my area that administers it so I decided to take the plunge regardless of the cost. I wanted to know once and for all what my real magnesium levels were!

While I’m not happy spending that kind of money, I’m glad I did it because I finally know the answer to my much anticipated question – am I magnesium deficient?

And what was the answer to my question?

YES – I am magnesium deficient!

Take a look at the actual test results: 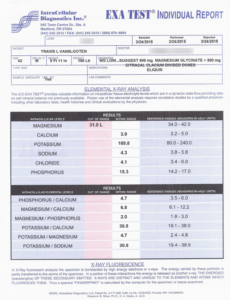 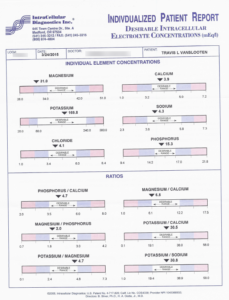 As you can see, I’m low on magnesium – this despite taking 750mg of magnesium supplements every day for well over the past year. What an eye-opener this test was! Everything else looks pretty good, actually.

Side Note: I think it’s important to point out that my magnesium supplementation up until about three months ago was mostly magnesium citrate and basic magnesium glycinate capsules. In the past few months I have switched to ReMag (roughly 675 mg per day) plus about 300 mg of Viva Labs magnesium chelate. I will slowly be switching exclusively to ReMag and upping that dose to about 900 mg per day. I’ll then retest my magnesium levels in about 4-5 months.

There is one thing I need to highlight. There is a recommendation at the top of the report that I should supplement daily with 800mg of magnesium and 800mg of calcium.

I’m going to ignore both recommendations. The recommendation to take 800mg of magnesium assumes that I’m not already taking magnesium. Since I’ve been taking 750mg daily, I’ll actually up my daily magnesium to 900mg per day moving forward and may even push it to 1,000mg per day.

Although I have my doubts those levels will even make a difference. I know of some people that have to have magnesium administered via I.V. to get their levels up to normal. I have no idea how that would work. I can’t imagine in a million years my doctor agreeing to give me IV injections of magnesium. And in our state naturopathic doctors aren’t allowed to pierce the skin of their patients so they can’t administer anything via an I.V. For now I’ll have to stick to oral supplements and hope they boost my levels.

I’m going to skip the calcium all together because calcium is a big no-no for afibbers. Plus, my calcium levels are actually pretty good according to the test results. I must be getting enough calcium through my diet.

It takes several months to build up magnesium in the body. I’ll plan on retaking the test again towards the end of the year to see if I’m making any progress at my new daily magnesium levels of 900 – 1,000mg.

There is one other magnesium test available that I want to mention and that is the RBC magnesium test, or Red Blood Cell magnesium test. This test is supposedly more accurate than the serum test but still not very accurate. The reason being it only measures magnesium in the red blood cells in your blood stream and not the cells in your tissues where most of the magnesium is. This test can also be expensive and most doctors won’t even offer it as an option.

Case in point: When I requested the second magnesium test from my doctor in January 2015, I specifically asked for the RBC test. He said sure, only to set me up with the standard serum test. He completely ignored my request and probably assumed the serum test was “good enough.”