You are here: Home / Questions and Answers / What is Pill-in-the-Pocket for Atrial Fibrillation? 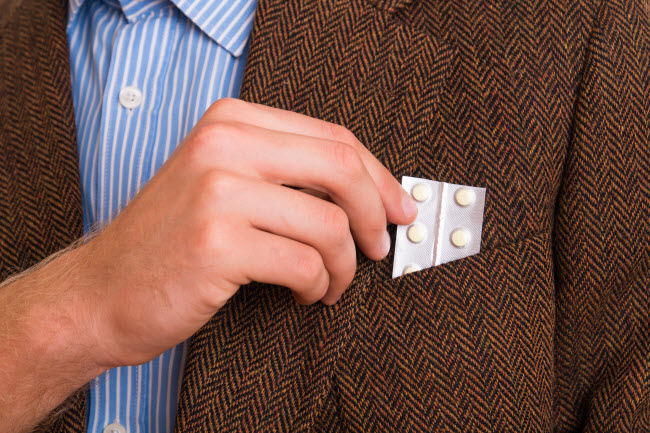 In your last Q&A session you mentioned pill-in-the-pocket. Can you tell me a little more about it? I have an appointment coming up with my EP and I’d like to discuss this with him. Thanks.

What is Pill-in-the-Pocket for Atrial Fibrillation?

Pill-in-the-pocket is a treatment protocol where you take an antiarrhythmic drug (flecainide or propafenone) in a large dose at the onset of an episode. What makes this treatment protocol unique is that you only take the drug when needed vs. taking it every day.

What is considered a “large dose?”

In some cases, you’ll be required to start the pill-in-the-pocket protocol in a hospital so your doctor can monitor how your heart responds to these drugs when taken in large doses. I was encouraged to do so by one of my EPs while my other EP said I was perfectly fine to try it on my own without hospital supervision. These contradictory opinions really confused me and scared me so my flecainide sat on the counter for months. I was too scared to try it “on my own” and I didn’t want to deal with the fuss of going to the hospital to take it either.

Out of desperation one day during an intense episode I decided the heck with it, I’m just going to take it. I’m glad I did because it changed everything! For starters, not only did I convert into normal sinus rhythm within a few hours but for the first time I felt I had some control over my afib! From that point forward I didn’t fear afib as much. I knew if I had an episode I could just pop my flecainide and I would be back to normal in just a few short hours. I no longer had to worry about having to go to the E.R. The pill-in-the-pocket was a total game changer for me.

Pill-in-the-pocket worked great for me but will it work great for you?

I can tell you the vast majority of afibbers I’ve talked to that follow this protocol say it works. I can only recall a couple examples where the pill in the pocket didn’t work but even in those cases the protocol worked for a while at first but just lost its efficacy over time.

In addition to the anecdotal evidence there is a study I’d like to highlight. I’m going to reference an article titled, “Outpatient treatment of recent-onset atrial fibrillation with the pill-in-the-pocket approach.”

The article details a study that was conducted to assess the feasibility and safety of treatment with either flecainide or propafenone administered as a single oral dose outside the hospital to terminate atrial fibrillation of recent onset in patients without severe heart disease who have infrequent, well-tolerated arrhythmic episodes (paroxysmal afib).

Treatment was considered successful if the interval between taking the drug and conversion to sinus rhythm was six hours or less with no observable side effects.

There were a total of 268 patients with recent onset atrial fibrillation that were first treated in the hospital with flecainide or propafenone. 58 patients were not given out-of-hospital treatment moving forward for various reasons. See the study for those reasons.

The remaining 210 patients in the study were discharged and given flecainide or propafenone as a pill in the pocket to treat any future afib episodes.

The mean follow up period was 15 months + or – 5 months. 4 patients of the original 210 patients were lost to follow up. Of the remaining 206 patients, 41 (20 percent) did not have any episodes during the follow up period.

139 of the 165 patients that used flecainide or propafenone as a pill in the pocket at the onset of an afib episode were able to successfully terminate ALL of their afib episodes (84 percent). The other 26 patients (16 percent) had at least one episode that lasted more than six hours after taking the drug.

Recap Findings of the Study

The study found that oral flecainide and propafenone when used as a pill in the pocket as out of hospital treatment, stopped 94 percent of the afib episodes within 6 hours, and in 84 percent of the patients, the treatment was effective for ALL afib episodes, with a mean conversion time of about 2 hours. In addition, the incidence of adverse side effects was low. Only one patient (.6 percent) felt a marked acceleration of the heart rate after taking flecainide and was shown to have atrial flutter with a rapid ventricular rate by an ECG in the emergency room.

Bottom Line: The study concluded that the pill-in-the-pocket approach appears to be feasible and safe (and I would add successful!).

If you take the results of that study along with the anecdotal evidence, I’d say the pill-in-the-pocket protocol does work and should definitely be considered for any paroxysmal case – especially young people with paroxysmal afib!

There you have it, Scott, that is my very long-winded answer to your very simple question.

Are you doing pill-in-the-pocket to treat your atrial fibrillation? If so, are you taking flecainide or propafenone? Does it work for you? Share you experiences in the comments below!