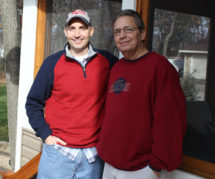 This picture was taken of me and my dad in November 2014 – just a couple days before I left to meet with Dr. Natale for my initial consultation for my ablation. He looked pretty good in this picture but I had no idea how sick he really was. He would be admitted to the ICU on Saturday morning, June 27, 2015, and would die the following Sunday evening. He would have total right side heart failure, liver failure, kidney […]

Afib kept interfering with Paul Silver’s life. He is a symphony musician in Pittsburgh, PA who often had to travel. He had episodes on flights–scary! He received a catheter ablation (called a PVI in the article) and it was a great success. Today, Paul feels like a completely different person. “I haven’t had any episodes of atrial fibrillation since I had my PVI. The odds are very high that I won’t have a recurrence of arrhythmias. That has given me […]

Danny Abramowicz, retired NFL player, is now AF free after his second catheter ablation, which was performed at the Loyola University Medical Center. Abramowicz once played both for the New Orleans Saints and the San Francisco 49ers. It’s far more common to need two catheter ablations to correct afib than it is to see an end to arrhythmia after a simple, single procedure. It’s still a great success story to hear about, no matter how many procedures it took.

Here’s another success story I just spotted. This one came out of Huffington, WV. It’s about J.C. Price, a football coach who suffered from AF, but who is now back in the game. He went in for a cathetar ablation, and is doing better now. You can read the full story here. I sort of wish these newspapers would do follow-up stories when they feature a success story. We always hear about the initial success, but we never hear anything […]

Here’s another a-fib success story! Sgt. John Thibault of the Wauconda Police Department has been cured of a-fib symptoms after going in for a catheter ablation procedure. He spent just one night in the hospital. He shares his experience in the video below. One thing that’s really fun about these success stories is the number of times we hear about patients who get to go back to enjoying physical activities that a-fib had once taken away from them. He was […]