Many of the symptoms of atrial fibrillation are common to other conditions as well so it’s not something you can diagnose on your own doing a search online! It’s best to see a doctor if you have any of the typical afib symptoms such as shortness of breath, palpitations, fatigue, dizziness, chest pain, or fainting.

When you see a doctor, these are some of the tests that might be done to help diagnose atrial fibrillation.

The first test a doctor will likely do is an electrocardiogram, also known as an EKG or ECG. This is the most common and useful test. It’s also very simple and painless. Sensors are attached to your body and they record the electrical activity of your heart. The test takes less than 5 minutes. Here is a short video that demonstrates what the test is about:

This is what your EKG will look like if you have a regular heart beat (normal sinus rhythm):

And this is what your EKG will look like if you have atrial fibrillation:

The drawback to an EKG is that it is only effective at diagnosing afib if your are actually in afib during the test. Unless you have permanent afib – meaning you have it all the time – or you happen to have an episode during the test – it won’t be detected during an EKG. If that’s the case, then the doctor will likely use a monitor to diagnose atrial fibrillation.

If you have occasional afib, also called Paroxysmal afib, then an EKG isn’t going to work – unless of course you happen to have an episode during the test. In this case, doctors will use a Holter monitor and/or a cardiac event monitor. In some cases an implantable monitor will be used.

The Holter monitor is usually the first type of monitor a doctor will use because it’s the least invasive to use and only takes 24-48 hours to complete. With a Holter monitor you wear a small recording device about the size of a smartphone. You wear it around your neck like a lanyard or attach it to your belt or simply place it in your pocket.

Like an EKG, there are wires running from it that attach to your body. You go about your daily activities for 24-48 hours while the device records the electrical activity of your heart the entire time. When you return the monitor to your doctor, the electrical activity that was recorded is analyzed to see if you had any episodes of atrial fibrillation.

Here is a photo of someone with a Holter monitor. You’ll notice the device is hanging out his front pant’s pocket. 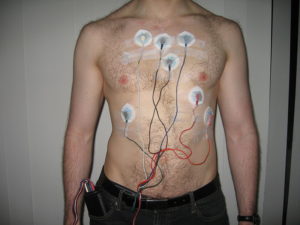 Unlike a Holter monitor that is only worn for 24-48 hours, a cardiac event monitor is worn until enough data is collected. Usually a doctor will have you wear it for 21-30 days but if enough data isn’t collected in that time frame, you might have to wear it for another month or more.

Here is a good video from someone who talks about her experience using a cardiac event monitor:

The other type of monitor used is the implantable monitor. This is the most invasive type of monitor because it requires a small incision to insert it under the skin. These are usually used when an event monitor doesn’t capture any activity (i.e. you have such infrequent episodes), or if you’re experiencing fainting or passing out where the cause isn’t detected by a Holter or event monitor.

For some, atrial fibrillation is triggered by physical stress so if you tell your doctor you mainly feel heart palpitations when you exercise or during physical activity, your doctor may do a stress echocardiogram. This is where they hook you up with a bunch of wires to monitor all your vitals while you run on a treadmill at increasing intensities. Prior to the test, they do an echocardiogram. Here is a video that demonstrates what this test is all about:

If you have symptoms of light-headedness, dizziness, or fainting but an EKG nor a monitor reveals any arrhythmias, this test might be performed. You are tilted upright at a 70-80 degree angle for 30-45 minutes. Your heart rate and blood pressure are monitored during the test to detect anything unusual.

This test is done by an electrophysiologist, or EP, in an electrophysiology lab. EPs are specialists that diagnosis and treat abnormal heart rhythms. During this test several electrode catheters are inserted through the veins in your groin and placed on your heart. Once in place, the EP can study and record the electrical activity of your heart. If you don’t have an irregular heart beat during the study, the EP will try to trigger arrhythmias. Here is a video that explains the procedure:

An echo uses ultrasound waves to create a moving picture of your heart. It’s very similar to having an ultrasound when you’re pregnant. Instead of seeing a “picture” of your baby, you see a picture of your heart. The primary purpose of this test is to gain information about the size, shape, and function of the heart. Here is a video that explains what this test is about:

These are some of the tests you will likely go through in an effort to determine if you have atrial fibrillation or some other heart problem. You may only have to have one of the tests done or many. Since the beginning of my afib journey going back to 2005, I have had several EKGs, a few echos, a stress test, a Holter monitor, and a cardiac event monitor!

Of all the tests I had done, only the EKGs confirmed I had atrial fibrillation and it was only detected when I was in the emergency room because I knew I was having an episode. I have occasional afib, or Paroxysmal afib, which means I don’t have it all the time.

If you have regular episodes of atrial fibrillation, an EKG or a Holter or cardiac event monitor will likely confirm the diagnosis. If you are experiencing regular heart palpitations or any of the common symptoms of afib, you should consult with your doctor to have one of these tests completed to determine if you in fact have atrial fibrillation.

Latest from the Blog 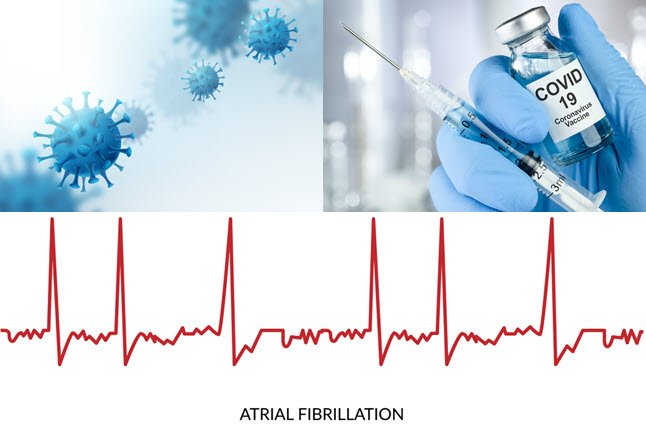 I wanted to write on the topic of COVID-19, vaccines, and atrial fibrillation because I wanted to provide a place for you, the reader, to voice your thoughts, opinions, and experiences on the topic. Most websites these days don't allow you to leave comments, and those that do aren't particularly ... END_OF_DOCUMENT_TOKEN_TO_BE_REPLACED