You are here: Home / My Afib Journey / My Shortest Atrial Fibrillation Episode To Date

I had my last episode less than 48 hours ago. When I wrote about that episode I sarcastically joked that at the rate my episodes were occurring I’d be writing daily pretty soon. Well it looks like I shouldn’t have been such a smart ass because here I am writing again. It’s not a good thing when the posts filed under “my afib journey” are growing by the week!

I went to bed late as usual around 1 a.m. I woke up at 1:56 a.m. on my back and when I turned to my side to look at my phone to see what time it was I went into afib. At first I didn’t think anything of it. I thought it was just a harmless heart palpitation, but when I put the phone down and lay back down on my side the palpitations wouldn’t stop. I knew I was in afib.

I lay there frustrated until 2:16 a.m. when I finally got up and headed to the kitchen for my latest “afib cocktail” which now consists of 300 mg. of Flecainide, 120 mg. of magnesium glycinate, and 2 vitamin B-complex capsules. Five minutes later I took an EKG reading using my AliveCor monitor: 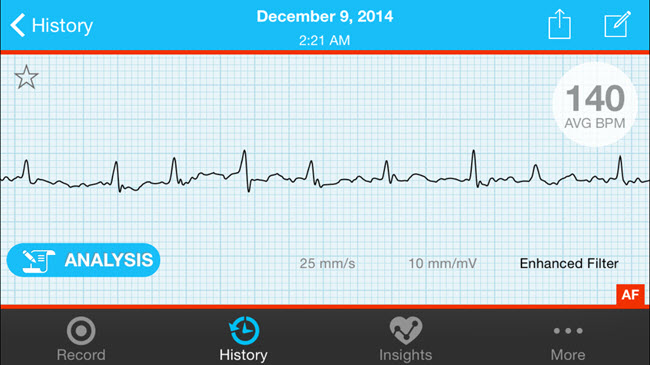 Yup. I was in afib all right. I went back to bed and turned on the TV to watch Family Guy. I figured I’d be watching TV for a while. To my pleasant surprise, I converted thirty-four minutes later! I couldn’t believe it.

One second I was in total misery as my heart was just pounding out of chest and the next second I was in NSR. It happened that quickly. It was like someone flipped a switch. All told, I was in afib for just fifty-four minutes! That’s a new record for me. I’ve never had an episode that short.

It was so short that I refused to believe it so I continued to watch TV for another thirty minutes because I was convinced I was still in afib and just couldn’t feel it, or if I was indeed out of afib it would come back any minute. There was no way the episode was over that quickly I kept telling myself.

Finally at 3:21 a.m. I figured I would accept reality so I shut off the TV and took one final EKG reading before going to back to sleep: 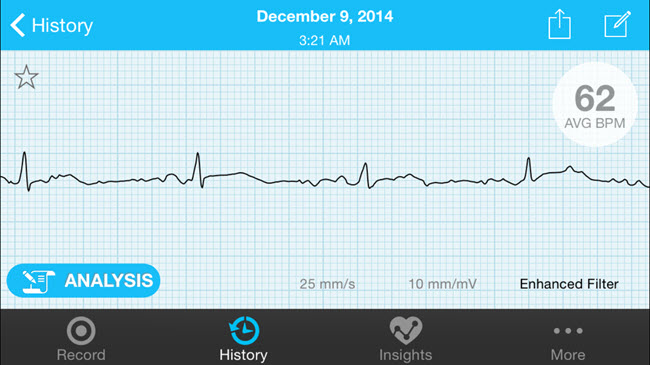 I was in fact out of afib! I wish all my episodes were that quick.

Because my episodes are so random now and there doesn’t seem to be any rhyme or reason to them, I’m tempted to stop commenting on potential triggers but I think I’ll continue speculating anyway as it might benefit others reading this.

When I try to pin point triggers, I try to identify anything different in my daily routines or diet. On Monday, there were a few changes. I went to the gym and had a solid cardio workout. I jogged on the treadmill for 30 minutes but only at 5 mph. It was a very moderate workout but I worked up a good sweat nonetheless.

I also did some very light weight lifting. And by light I mean I just worked the roman chair to work my lower back and I did some pull downs to work my upper back. When I did the roman chair I went very slow and I only used 40 pounds when I did the pull downs. I’m embarrassed to even call this weight lifting but I’m trying to gradually get back to lifting more to get more tone in my muscles.

Because of the “new workout” I ate slightly more than I normal. I had just shy of 1,800 calories. Normally I’m right around 1,500 calories per day. There wasn’t anything unusual about my diet other than that. I didn’t have any meals where I ate too much and I didn’t have any “carb heavy” meals either. And this was the second straight day I didn’t have my nightly cocktail right before bed (vodka/7 up).

The one thing I did do that was totally out of the ordinary was I took half an Unisom tablet (12.5 mg. of doxylamine succinate). The reason I did that was because I was so wired and wide awake when I went to bed that I thought I would try half a tablet just to see if it would help me get tired so I could get to sleep faster. I don’t think it helped at all and I had dreams all night long and woke up with a very dry mouth (both are common side effects of Unisom). I won’t be doing that again!

I guess the only other thing I did was I had a cup of tea about ninety minutes before bed. I used a concoction of passion flower, chamomile, and this herbal tea blend called, “night-time tea” that has those same ingredients and a few others. This was my second night drinking this tea before going to bed.

In an effort to try to pin point potential triggers, I thought I would try replacing my nightly cocktail with a nightly cup of tea. I wanted to see if not drinking any alcohol had a positive effect on my episodes. Almost any doctor you talk to says that even moderate drinking can contribute to afib. I’ve always thought it was bullshit as nobody has any concrete proof. It’s all speculation but I figured I would test it out.

It’s kind of ironic that I skipped my nightly cocktail for two nights and I had two episodes. It just goes to show you that trying to pin point triggers is nearly impossible. For some, even one cocktail may trigger afib. For me, it doesn’t seem to make a difference. In fact, I don’t drink and I have more episodes! Of course I don’t have plans to drink any more or less. I just wanted confirmation that my one nightly cocktail wasn’t affecting anything.

And before you jump to conclusions and shout the Unisom and/or tea concoction were the triggers, I have taken both before many times in the past and have never had episodes. There was a three month stretch about two years ago where I was going through some serious insomnia. I cut out alcohol completely and had this same cup of tea and a half Unisom tablet every single night. I never had a single palpitation let alone afib during those three months and that entire year I didn’t have a single episode!

As you can see, as atrial fibrillation progresses, it becomes impossible to identify triggers. You get to a point where you simply can’t conclusively say, “these are my triggers.” It’s like afib just takes over and has a mind of its own. All you can do is deal with the episodes as best as you can when they come. You’re on a fool’s errand if you think you can prevent them by avoiding this or that.

Maybe I’m wrong. Maybe there is a natural way to cure this crap but I’m at a loss trying to figure it out. That’s why I have elected to roll the dice on an ablation. And if that doesn’t work I’ll have another one. And if a second one doesn’t work…well then I don’t know what the hell I’m going to do.