You are here: Home / My Afib Journey / Another Atrial Fibrillation Episode after a Four Week Reprieve

Wow…I went almost went an entire month without an episode! It just goes to show you how unpredictable atrial fibrillation is. I was having an episode consistently every week or two and out of the blue I go almost a month in between episodes. Don’t get me wrong. I’m not complaining. It’s been a wonderful break.

This one started the same as most of my episodes – at night while lying in bed. It was 1:25 a.m. I was reading my usual news apps on my iPhone and five minutes later my heart started pounding. I knew what was happening so I immediately sat up in bed. I’ve had a few “afib runs” before like that and I have been able to prevent a full-fledged attack by simply sitting up for a few minutes. This wasn’t going to be one of those times. I sat up in bed for about 20 minutes reading the news and my heart just kept pounding away.

I was strangely calm about it. I guess part of me was just thankful that I was blessed with a four week break. I knew this moment would be coming sooner or later so I just took it in stride. I got up and grabbed my AliveCor monitor to confirm what I already knew: 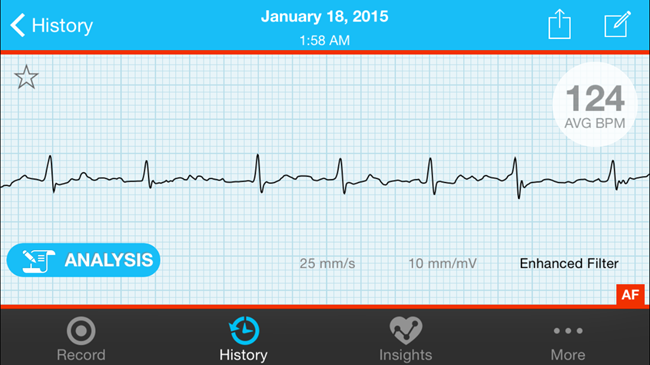 I downed 300 mg of Flecainide and 240 mg of magnesium glycinate. I also lathered a tablespoon of magnesium gel all over my upper body. I’ve been using this gel for the past couple weeks as a way to get as much magnesium in my body as I can. You get 490 mg of elemental magnesium in one teaspoon so a tablespoon is 1,470 mg of magnesium. This stuff is super messy, however. I’ll write about it in a separate post but sufficed it to say, I had to take a shower 30 minutes after I applied it to wash it off.

I went downstairs and watched a bunch of TV shows I had recorded on the DVR. That’s one of the positives of having an afib episode. It gives me a chance to catch up on all of my shows! As I mentioned already, thirty minutes into my first TV show the magnesium gel had dried so I got up to take a shower to get it all off. When it dries, it leaves a white crust-like flaky layer on your skin. The shower was a bad idea. I like to take really hot showers and the heat made my heart work even harder so I felt worse for about an hour after the shower.

I spent the rest of the early morning hours in my chair watching TV. When I’m in afib, I can’t do anything other than watch TV. I can’t read. I can’t sleep. I can’t work on my computer. I can’t do anything as it’s just too hard to concentrate or relax when my heart is pounding out of my chest. Since my last episode took six hours before I converted I set my expectations accordingly. I figured I would be up until at least 7:30 a.m. That’s a lot of TV!

At 5 a.m. I was getting really tired so I went to bed to watch TV there. Can you guess what I watched? If you’re a regular reader of my blog you know – Family Guy! At one point I thought maybe I had converted so I took an EKG reading with my trusty AliveCor again: 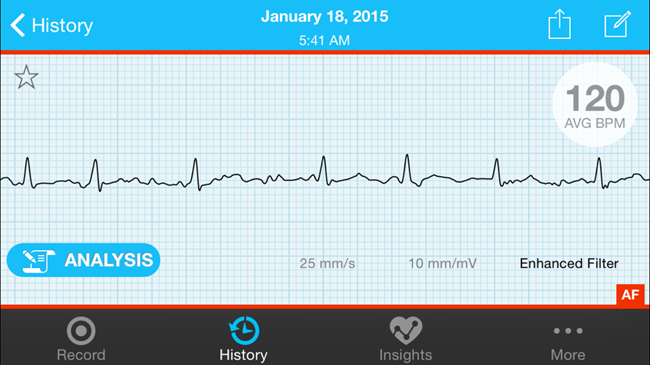 Nope. I was still in full-fledged atrial fibrillation. At this point I started to get a little nervous. Even though I kept telling myself it would probably be 7:30 a.m. before I would be out of this, I wasn’t comfortable that I wasn’t making any progress on getting converted. My afib episode wasn’t any worse or any better than it was at 1:30 a.m. I continued to watch Family Guy.

Finally at 6:45 a.m. I had enough. I was just too tired to keep watching TV. I was exhausted. I popped .5 mg of Lorazepam, literally prayed to God to convert me in my sleep, shut off my light, and tried to go to sleep. It was super uncomfortable because no matter what position I was in I could hear and/or feel my heart pounding away erratically. I was so tired, however, I passed out. This was a first. I’ve never been able to sleep through an episode before.

When I woke up at noon, I was in NSR. What a relief. Even though this was a long episode, it was very manageable. It wasn’t as crippling as some of my episodes in the past. I wasn’t absolutely miserable. And when I got up to go to the bathroom or get a drink of water, I didn’t get faint or dizzy. It wasn’t exactly a picnic, but it wasn’t one of my episodes from hell. I was also just so grateful that I was given a reprieve from my constant episodes. I was happy that I got almost four full weeks without an episode and so it made it easier to deal with this latest one.

In hindsight, I think this atrial fibrillation episode was easy to predict. When I woke up Saturday morning I was tired – the kind of tired where I knew I was going to have to take a nap later in the day. There was also a lot of drama (translation STRESS) going on in our house. Let’s just say the kids were acting up so there was a lot of crying, yelling, and general chaos. And for whatever reason I was “on edge” all day as well as I was blowing up a lot. Every little thing was really irritating me so I was getting stressed out about everything.

Then at night I was having several PVCs or PACs on and off all night. They were so frequent that at times I thought maybe I was in afib. I knew I wasn’t because I know my heart. Whatever was going on it wasn’t afib.

A smart person would have read all of these signs and would have skipped the nightly cocktail and went to bed a little early. Not me. I never claim to be smart when it comes to my afib. Instead I ignored all the signs and didn’t have just one but two cocktails. I also proceeded to eat a bunch of food too because I was starving (I had a very light dinner). I also stayed up late as usual. I think I was getting cocky since I hadn’t had an episode in a month. I figured I was immune to another attack. I was wrong!

I’m just crossing my fingers and praying now that I can go another month – or at least 2-3 weeks – before my next episode. My ablation with Dr. Natale is scheduled for March 5th so I’m hoping to limit my attacks to no more than three before then.