You are here: Home / My Afib Journey / My Initial Experience & Side Effects Taking Eliquis for Atrial Fibrillation 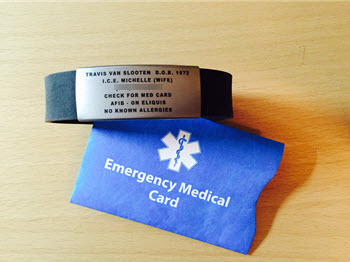 My ablation is scheduled for March 5th. Dr. Natale wants his patients on a blood thinner for 3-4 weeks prior to the procedure so I officially started on Eliquis (Apixaban) on February 12th at exactly 10:15 a.m.

I was really nervous about taking these so I waited for as long as I could to start them. Since the beginning of the year a day didn’t go by that I didn’t think about these stupid blood thinners. I dreaded going on them. I was concerned about the potential side effects, and I probably watch too much sci-fi (thanks Walking Dead) because I was also freaking out about bleeding to death. I imagined I would be sitting at my computer or watching TV and suddenly blood would start flowing from every orifice of my body. Yes, my imagination was running wild.

The first step in the process was getting the prescription filled. I was shocked at how expensive it was. I knew it was $300 – $400 for a month’s supply but I never gave it any thought because until now it wasn’t something I had to deal with. The retail price on the receipt was $325. Fortunately, since we surpassed our high deductible months ago, our “full insurance” kicked in so my out-of-pocket cost was only $22! Our insurance plan restarts in April so our high deductible will be in place again. At that point I’ll be paying the full $325.

If all goes accordingly to plan, I will only need to be on Eliquis through May so I shouldn’t need to spend more than $650. Don’t get me wrong, that’s still a lot of money but at least I don’t have to pay that much every month for the rest of my life like so many people have to do. I honestly don’t know how people do it. $300 – $400/month for just one drug is a lot of money!

As soon as I got the prescription filled I put it in the back of our medicine cabinet so I wouldn’t have to be reminded of it. That didn’t help any because I’m a heavy supplement user. Every time I would take my supplements I would think about the damn blood thinner sitting in my cabinet.

The reality of the situation really hit me when Shannon, the editor over at Afibbers.org, advised me to get a medical ID bracelet just in case I was in major accident. I hadn’t even thought of that so I promptly ordered one.

As I was ordering my bracelet and filling out the form for what I wanted engraved on it I couldn’t believe what I was doing. Was I actually ordering a medical ID bracelet for a blood thinner I was going to be on at the age of 42? I’m not one to get depressed but I did get a little angry about the whole situation.

When the bracelet and ID card arrived I looked at it with disgust. I always thought medical ID bracelets were for really sick people or for people in their 80s and 90s. I’m not “sick” and I’m not old. Why did I have to wear this damn thing? Why did I have to be on a stupid blood thinner? Yes, I had myself a good old fashioned pity party.

Then a few days later the big day arrived. It was time to swallow that first pill. I just sat and stared at it for a minute, wondering what was going to happen after I took it. I threw it in my mouth and chugged it down with water and went about my day…waiting for the internal bleeding to start.

In all seriousness I did constantly wipe my nose to check for a nose bleed that day. And even now when my nose runs I immediately “check for blood.” Yes, I’m still very nervous about the whole bleeding thing.

While I didn’t bleed out that first day I did experience some minor side effects. Later in the afternoon I had an upset stomach with the strong urge to go to the bathroom. When I went, I had very loose bowels – borderline diarrhea. I thought maybe it was something else but I had a suspicion it was the damn Eliquis.

For the first three days on Eliquis I was experiencing those side effects but only in the late afternoon hours (usually right around 4 p.m.). They only lasted for a couple hours but it drove me crazy because I didn’t have control over it. By that I mean, I knew it was the Eliquis but unlike a supplement I might experiment with, I couldn’t just stop taking it. I was stuck with it and I had no control over the side effects.

I’ve been tweaking my supplements and trying different things with my diet to keep these side effects to a minimum and I’m happy to report that now on day four they are getting better. Today I barely had an upset stomach and while I still had that urge to go to the bathroom, my bowel movement wasn’t as “loose” shall we say. I will continue to tweak things until I get these side effects under control.

Aside from those side effects, it’s been pretty uneventful so far (thank God). I still constantly think about bleeding out or getting into a bad car accident. And I still constantly wipe my nose checking for blood. I realize this is ridiculous but I’m just wired to worry, I guess.

I should point out that while I worry about stuff, it doesn’t necessarily consume me. I don’t get depressed nor do I alter how I live because of those thoughts. Worry probably isn’t the right word to use. It’s more of having on and off thoughts about these things throughout the day.

There is one major change I have made, however. I quit drinking all together for now. My heavy drinking days are long gone but I still enjoy my nightly vodka/7-up cocktail so I wasn’t looking forward to giving that up. I don’t want to be drinking at all during the three month recovery period after the ablation so I thought I would stop now. I figured what the hell, I’m taking blood thinners now I might as well quit drinking too.

While I miss not having my nightly cocktail, quitting drinking turned out not to be such a big deal either. Like the blood thinners, I know it’s only temporary and I know it’s the best thing for me right now.

I can’t wait until June when this is all over and I can enjoy a cocktail in the warm summer sun.