You are here: Home / My Afib Journey / Part 1: A Night of Hard Core Drinking Leads To My First "Official" Afib Episode 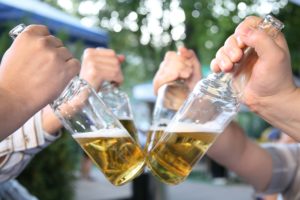 I never drank an ounce of liquor in my life until I turned 18 and moved to Minneapolis with a couple buddies. One of my buddies had always been a drinker and partier so one of the first things he did was stock our fridge with beer.

One Friday night I thought I would try one. I got drunk, had a great time, and I have never looked back. Ever since then I have been a heavy drinker. Vodka 7 is my drink of choice today and while I don’t drink nearly as heavily as I did in my 20’s and early 30’s, I still have a cocktail every night. What can I say, life is just a little more enjoyable with a cocktail or two.

I should also point out that I have always had a train wreck of a diet. Just think of how your typical teenager eats (a teenager of the 80’s anyway…I don’t know how teenagers eat today). That’s how I still eat today and I’m 41 years old. From the time I was a teenager, my diet has always consisted primarily of fast food, junk food, pop, (and liquor after I turned 18). It’s actually quite amazing I’m as healthy as I am – well other than this damn atrial fibrillation.

On Saturday, June 17, 2006, (I was 33 years old) I was in my hometown for our annual family golf event that we were doing at the time. Most of the people in our family are drinkers so naturally the day started out with some cold beers. This would have been around 10 a.m.

The golf outing started around 1 p.m. so it was booze up until then and throughout the day. Not everyone was drinking. My wife and most of the women were being responsible, but the guys were not holding back. While we were pacing ourselves, it was pretty much non-stop drinking the entire day.

After the golf outing we all gathered at a friend’s house for dinner – which consisted of grilled hot dogs and hamburgers and chips – and guess what else? More booze! But this time we kicked it up a notch and some of us started doing shots of Tequila and drinking cocktails. After all, you can’t drink beer all day long. It’s too bloating.

Some of us then went back to our hotel to get cleaned up and hit the casino for more booze and fun! There we had more cocktails and now different shots of god-knows-what. Yes, I was a mess but I was sure having fun. I probably got back to my hotel room and crashed around 1:30 a.m. because the bar shut down shortly before that.

I probably woke up the next morning around 10 a.m. It was the most painful morning of my entire life. I had the most excruciating hang over I had ever had – and that was saying something. You’re talking about a guy, who for over 10 years would drink so heavily on the weekends that he would often times black out, and yet rarely had “painful” hang overs. So the fact that I wanted someone to put a bullet in my head to put me out of my misery says something. It was bad.

I had my wife go down to the hotel store to get some Ibuprofen or whatever – anything to get rid of the pounding headache I had. I rarely had hang overs with headaches. I would just get really tired and feel like crap when I was hung over, but never headaches that required medication.

My wife returned with the Ibuprofen or whatever she had, and I quickly washed down 2 pills with ice cold Pepsi (or was it Coke – I can’t recall). I then downed the rest of the pop.

Still in pain, I took a shower, got dressed, and we headed over to a family member’s house for lunch. I’m sure I looked as bad as I felt. To this day, I can recall how awful I felt and how much pain I was in. I knew I drank heavily the night before, but my god, what did the bartenders put in my drinks, I joked.

Guess what was for lunch that day? My favorite – fast food! Everyone was in a hurry to get home so we figured we would just grab something at a local fast food joint and bring it back. Nobody was in the mood to make anything. I proceeded to have a large fry (as big as they come), a couple chili dogs, and a tall cold glass of Pepsi (extra ice of course).

After lunch we headed back home to Minneapolis, which was a two-hour drive away. On the way home we had to get gas so naturally I had to get another tall cold glass of Pepsi (extra ice) and a candy bar – the necessities of any road trip.

During the 2-hour road trip home, my hang over finally started getting better. I still felt like crap and was pretty tired, but the headache was subsiding and I was slowly starting to feel “normal.”

When we arrived in Minneapolis, I thought it would just be easier if we swung through Wendy’s for dinner. After all, did we really want to go home and cook or prepare something after such a long hard weekend? My wife didn’t really want to because she was sick of all the junk food we had been eating that weekend but I insisted. She got a small salad and bottled water and of course I got a large fry, hamburger, and drum roll please…another tall cold glass of Pepsi! Oh ya, I also got a small frosty.

We got to our apartment around 5 p.m. We took our food out and ate on the couch while watching TV. After I finished, I got up and grabbed my frosty from the fridge. I had a few spoonfuls while I was walking back to the couch and then I abruptly (and that word is important as you’ll discover in future posts) sat down and then it happened. My heart immediately started beating out of my chest.

At first I didn’t give it any thought but it wouldn’t stop. It kept pounding and pounding. I really started freaking out. I was convinced I was having a heart attack or something so my anxiety kicked into high gear and the next thing I knew I was sweating and shaking. This was it. I was having a full-fledged heart attack.

I put my frosty down on the coffee table and stood up and told my wife something was wrong. She looked at me confused and scared. I told her something was going on with my heart. I don’t know what but it didn’t feel normal at all. I remember her asking me in total fear, “Do you think you’re having a heart attack. Should I call 911?”

“No, I don’t think it’s a heart attack,” I said. “Let’s just wait a few minutes here and see what happens.”

At this point my wife was really scared and was looking for her phone, telling me she was going to call 911. She wasn’t going to wait!

At first I fought her on it but as my heart kept pounding harder and harder, I relented. “Fine, call 911 but tell them we’ll meet them at the front apartment gate. I don’t want everyone in the building to watch me get hauled out on a stretcher and into a damn ambulance.”

I’m in the middle of having what might be a heart attack and I’m worried about what my neighbors think! Is that stupid or what? In hindsight I think if I knew I was really having a heart attack, I wouldn’t have cared. Sure something was terribly wrong, but I was standing and walking around just fine and I had no pain whatsoever. Instinctively I think knew it wasn’t the end of the road for me so I could at least maintain some dignity during all this and have the ambulance come get me outside the apartment complex!

My wife and I got in our SUV and drove just outside the main apartment gate with our 2-year old daughter and waited for the ambulance to arrive. Within minutes, a cop car zoomed into the area and the ambulance was right behind. If my anxiety wasn’t in overdrive yet it was then. The cop rushed out of his car and came over to talk to me. Right behind him were the EMTs. I was struck at how calm they all were. They were talking to me like you would talk to someone over a cup of coffee or something. There was no sense of urgency or panic at all. It was so surreal.

After answering some questions they assisted me up into the ambulance and had me lay down on the stretcher inside. As they were checking my vitals and giving me oxygen, they asked what hospital I wanted to go to. I thought that was a strange question. I didn’t realize you got to choose what hospital you wanted to be taken to. I said, “Just take me to the nearest one. I don’t really care.” Off to North Memorial Hospital we went.

As I was lying on the stretcher looking out the back of the ambulance, my wife was standing on the street with this look of total fear and shock on her face as she was holding our clueless and happy-go-lucky daughter. I’ll never forget that image because it almost brought tears to my eyes. What if this was it? What if this was the last time I was going to see my wife and daughter? All kinds of crazy things were going through my mind.

As the ambulance pulled away with my wife and daughter following, I couldn’t believe what was going on. I was actually in an ambulance being hauled to a hospital. “Was this really happening?” I thought to myself. I also noticed that the ambulance didn’t have the sirens going and we weren’t exactly speeding through the city either. That actually provided some comfort because I figured if something was seriously wrong with me, the sirens would be wailing and we’d be doing 90 down the highway.

The hospital was only about 10 minutes away so we arrived there pretty quickly. When we pulled in, I was taken out on the stretcher and immediately wheeled into one of the emergency rooms. That’s when the fun really began.