You are here: Home / My Afib Journey / My One-Year Anniversary of Being A-Fib Free Since My Ablation 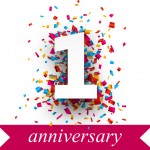 I meant to get this post published over the weekend but I was busy with family and doing miscellaneous things around the house. On March 5, 2015 I had my first (and hopefully last) catheter ablation by the great Dr. Natale down at St. David’s in Austin, TX.

I’m happy to report that I have been 100% afib-free since the procedure! Yes, it’s been over a year since I had my last episode of atrial fibrillation.

Prior to the ablation I had suffered from paroxysmal atrial fibrillation since Father’s Day 2006. During the nine years leading up to my ablation I was fortunate because I only had an episode once or twice per year – until 2014. That’s when the train went off the tracks.

In 2014 I started having episodes every month and then every other week and then once a week. You can see my afib progression chart here. My afib completely spun out of control. I had no idea why it was happening because I wasn’t doing anything different. The afib just had a mind of its own and took over.

After the episodes started occurring so frequently in the latter months of 2014, I immediately made an appointment with Dr. Natale to see if I was a good candidate for an ablation. Without hesitation he said I was an ideal candidate and with that I booked my ablation with him and never looked back. It was the smartest decision I ever made!

If you’ve been following my afib journey the past year you’ll know it hasn’t been totally smooth sailing. While I haven’t had any afib, I have struggled with PVCs and PACs on and off throughout the months. I don’t know if they have anything to do with the ablation or not. I’ve been told different things but regardless, they haven’t been that big of a deal and in the scheme of things are nothing compared to battling afib!

I’m just so grateful I have had such a good year and I just keep praying things will continue to go well!

What The Future Holds

I’ve been told that since the first year after my ablation went so well – literally not a blip of afib – I have a strong chance of going many years before a second ablation may be needed. Of course there are no guarantees but so far things look promising.

I know how this works so I have set my expectations accordingly. Personally, I’m hoping I can get at least 5, maybe even 10 years with this first ablation. No matter how much time I’m given, if the beast returns I won’t hesitate for a moment to have another ablation – so long as it’s Dr. Natale or someone on his team doing the procedure.

That’s the thing about afib and ablations. You have to go in hoping you’re a “one and done” case but preparing for at least two and maybe even three procedures to put the beast to bed for good. For some of you that might sound depressing but having 1-3 relatively “easy” procedures is nothing compared to battling afib everyday or dealing with the onslaught of side effects from those nasty drugs they give you to “treat” afib.

I will continue to enjoy the NSR I’ve been blessed with and will pray to God that the beast stays a way for a long time. If and when it returns, I’ll ask God to give me the strength and courage to face it head on and to bless me with another successful ablation!

As always, I will continue to post updates here as warranted. If you have any questions for me in the meantime, feel free to reach out to me via my contact page. I read and respond to every email I get so fire away!

Until the next update, I wish you all continued NSR!