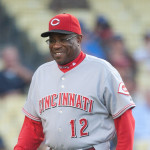 As you know, stroke is one of the biggest risks that people with atrial fibrillation face down every day. And nobody is immune or exempt. Just ask Dusty Baker, the former manager of the Cincinnati Reds.

He was hospitalized with symptoms of heart failure at Chicago’s Northwestern Memorial Hospital in the fall of 2012. Just before he was released he suffered from a mini stroke and was instantly re-admitted.

Apparently, Dusty knew he had atrial fibrillation prior to being hospitalized. I couldn’t find any information about his afib or how he was dealing with it but the fact that he had a stroke makes you wonder if he was taking blood thinners or not.

But as Baker was being discharged, he began slurring his words and had difficulty focusing his vision. He suffered a minor stroke, an occasional consequence of atrial fibrillation, or a seriously irregular heartbeat.

Baker was lucky to have suffered only a mini stroke and in the hospital of all places, but his story drives home the importance of taking atrial fibrillation seriously. If you ignore your symptoms or don’t take blood thinners, you may not be so lucky.