You are here: Home / My Afib Journey / My Second Ablation is Scheduled for January 19, 2023 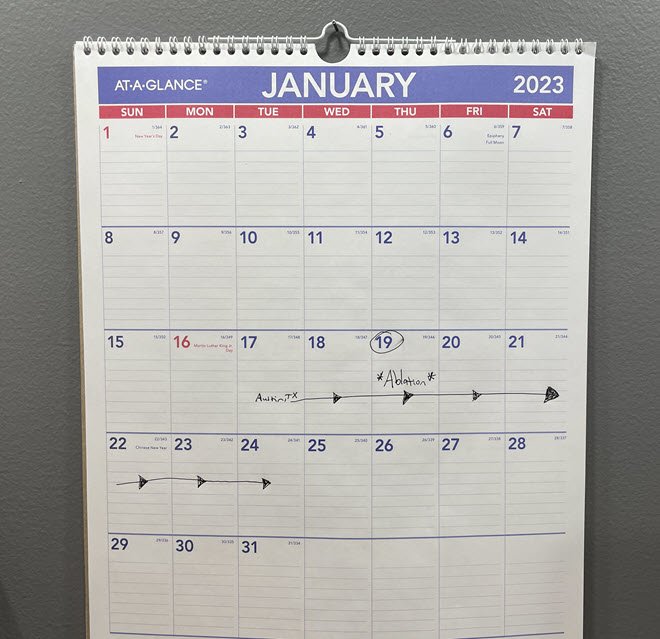 Since I went into atrial flutter on Wednesday, November 23rd, and the subsequent fifth cardioversion I had on Saturday, November 26th to get back into normal sinus rhythm, I have had an appointment with my local EP and my second ablation has been officially scheduled.

When I schedule these annual checkups, I always have an echo scheduled to be done on the same day as well. I always have the echo first thing in the morning, followed by an appointment with the EP right after.

This was the first year they couldn’t schedule the echo and my appointment with the EP on the same day. They had to split it up. I had the echo on Tuesday, November 22nd and the EP appointment on Wednesday, November 30th. This would turn out to be a blessing in disguise because it would allow me to see my EP just a few days after my atrial flutter event and the cardioversion. Talk about perfect timing.

My echo came back perfectly normal. There was nothing of concern to my EP. As he put it, my heart is perfectly healthy.

The appointment with my EP was an hour long. That’s another great thing about my doctor. He always gives me as much time as I need. Some years I only have a few questions so I’m in and out in 20 minutes. This year, I had a page of questions prepared so it took a full hour. I may write a blog post highlighting all the important things we covered so be on the lookout for that.

The most interesting takeaway from the appointment that I will share here is that he didn’t agree with me that a second ablation was needed “now.” He respected my decision and would support me regardless of what I did, but he said if it was him, he would wait.

He said I might not have another episode for another year or more. Then he joked, “of course I just jinxed it so you’ll probably have an episode tomorrow and everything I’m telling you is a moot point.” We have that kind of relationship where we can joke about these things.

His point was he didn’t see a need to rush into another ablation. I wasn’t surprised because most EPs take a conservative approach to the treatment of a-fib/atrial flutter after someone has had an initial index ablation, especially when someone like me goes almost eight years without a single episode after the first ablation.

He said if it was him, he’d wait for another episode. Then depending on how long it took for another episode to hit and what happened afterwards, he’d make the decision to either wait some more or get the second ablation scheduled.

I appreciated his opinion and point of view but ultimately disregarded it. I already had the ball rolling to get a second ablation scheduled by the maestro himself, Dr. Natale, down in Austin, TX.

Last week I got the confirmation from Dr. Natale’s office that my second ablation was scheduled for January 19, 2023. I was surprised they were able to get it scheduled so quickly. Normally it’s a 2-3 month wait. That’s fine with me. I’ll take it!

Prior to the ablation I have to have a consultation with Dr. Natale. That’s standard protocol with him. In the past, these consultations were always done in person. You’d have the consultation one day with him, and then if you wanted to proceed, you’d have your ablation the next day.

Now they do the consultations remotely so you can do them from the comfort of your home. They also do them now well in advance of the actual procedure date. My remote telemedicine consultation, for example, is scheduled for Tuesday, December 27th, a full three weeks before my procedure.

Before they scheduled my consultation and ablation, I had to send all my medical records to Dr. Natale so he could review everything.

I don’t expect much from this consultation as I suspect it’s more of an opportunity for me to ask questions to make sure I’m ready and willing to move forward with another ablation. I don’t think these consultations are done for the doctor’s sake to determine if you’re a candidate for an ablation. He wouldn’t waste his time or my time scheduling a consultation and an ablation if I wasn’t a good candidate.

I know the drill on these touch up ablations so there will be no doubt on my part about moving forward with another procedure, and I’ll likely have very few questions during the consultation. To me, the consultation is just a formality, but we shall see how it goes. I’ll definitely post an update after it’s done.

That’s where everything is at the moment. I have the consultation scheduled and the ablation scheduled. Now I just wait and cross my fingers and pray to God (literally) that I remain in normal sinus rhythm until I fly down to Austin, TX on Tuesday, January 17th.

On paper it seems like it’s just around the corner, but I still have to muster up the patience and mental fortitude to wait another 40 days, hoping and praying I stay in normal sinus rhythm the entire time so I can avoid another cardioversion. The wait is the most difficult part of this journey so far!