You are here: Home / My Afib Journey / My Most Pleasurable Atrial Fibrillation Episode To Date

Well it had to happen. I was hoping to go at least another week or more without an episode but no such luck. At least I got a slight reprieve and was able to go two weeks between my last episode instead of one.

This one came on at 9:45 p.m. last night (Monday night). This is starting to get really scary because my last three episodes now have been on Monday or Tuesday night at almost exactly 9:45 p.m. What are the odds of that? Afib is notorious for being unpredictable and variable. Mine you can practically set your clock by.

I literally ran out to my car to grab something and then I ran back into the house and sat abruptly down on my office chair to start working on my computer. That sudden movement of sitting down on my chair triggered the episode. That is another interesting pattern to my afib. The last three episodes were immediately triggered by a “movement down” – either sitting down or lying down. This isn’t anything entirely new, however, as almost all of my episodes have been immediately triggered by “sudden” movements going up or down.

I was really pissed off at first because I figured I would have another four-hour battle ahead of me. I waited about 20 minutes just to see if it would go away. Of course it didn’t. I took an EKG reading using my AliveCor monitor to confirm: 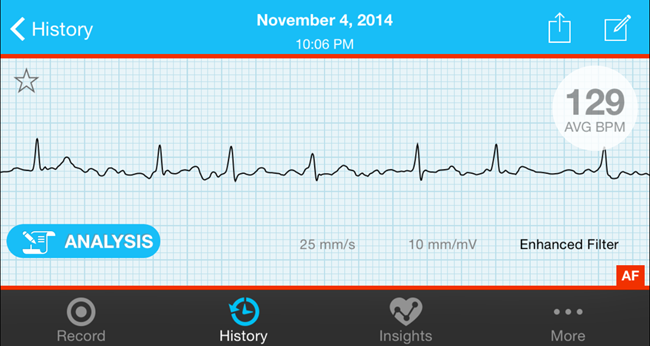 Eight minutes later I downed my 3 white pills of Flecainide and this time I also took 120mg of magnesium glycinate (one capsule). I went back into my office to work on my computer. My game plan was to work until I couldn’t stand it anymore and then go down into my man cave and watch TV for the next 3 hours – or however long it was going to take before the episode disappeared.

The most amazing thing happened. In the first hour I only had about 10 minutes of hell. I define hell as feeling really faint and having that awful feeling of losing your breath. In other words, I call it “hell” when the episodes are really intense. Otherwise, the majority of the hour was very tolerable. Yes, my heart was pounding away erratically, but it wasn’t debilitating. It was more of an annoyance. Because I felt relatively good, I kept working.

Then around 11:30 p.m. – just one hour and fifteen minutes after taking my Flecainide – I felt completely normal. In fact, to be honest, I felt pretty normal around 11:00 p.m. but it wasn’t until 11:30 p.m. when it finally dawned on me I had fully converted to NSR! I continued to work until just before midnight and I took another EKG reading to confirm I was in fact in NSR: 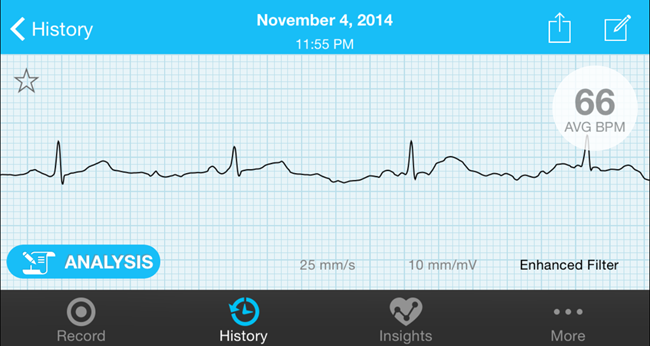 A one-hour and fifteen minute episode – with only 10 minutes of it being hell? It was too good to be true. I was so ecstatic I was giddy. I know I just got lucky. This was my eleventh episode since 2006 when I was first diagnosed with afib. None of them were ever this easy. This episode was, dare I say, “pleasurable,” – as far as atrial fibrillation goes. If every afib episode was this easy, it wouldn’t be such a big deal.

I’ve always thought that being tired and lack of sleep played a role in my afib episodes. I still believe it’s an underlying factor. But for this episode I was coming off the three best nights of sleep I’ve had since my vacation in Ft. Myers Beach, FL this spring. I had three nights in a row of 6 straight hours of sleep each night. This is unheard of for me so on this day I felt really good. I even took a 20 minute power nap the day of this episode and it was a great nap too. Bottom line – I wasn’t unusually tired leading up to this episode so I don’t think sleep was a factor.

What jumps out at me, however, is overeating. For lunch I had 3 small biscuits with a chicken breast. Even writing that is embarrassing – three biscuits? Really? One or two isn’t enough? I have to have three??? I usually don’t eat like that anymore but for some reason I decided to pig out.

Then for dinner I really went overboard. We had shredded chicken burrito bowls. These consist of chicken, beans, and rice – topped with shredded cheddar cheese and spicy salsa. I gobbled them up and went for seconds. The minute I dipped my spoon into my second heaping I knew I was going to regret it (why don’t we ever listen to that little voice in our heads?).

Sure enough, immediately after I finished my second serving I felt bloated and had that awful, “I ate too much. I feel fat feeling.” I felt this way leading right up to my episode. I have had episodes in the past where I had the same exact feeling because I ate too much during the meals prior to the episode.

For the past 2 months I have been recording everything I eat using the Lose It iPhone app. I’ve been doing this so I can stay on track and continue my weight loss efforts. When I look back at my diet for the past two episodes there is an interesting trend.

I had a couple pieces of Papa Johns cheese pizza for dinner prior to my episode on October 20th. Pizza, like rice, has a ton of carbohydrates. Because I only had two pieces and that was it, I wasn’t bloated at all. But it’s still a decent load of carbs.

Then get this, on October 13th I had white rice for dinner. Now looking back at that day, I only had about 3/4 a cup of rice and the dinner itself was pretty light. I have no record of feeling bloated that day, but again, another carbo load leading up to the episode.

Am I on to something? Probably not. It’s futile to try to determine triggers for this crap. If it was easy to identify triggers, we’d have a natural cure for atrial fibrillation by now. As hard as I try to identify what might be my personal triggers, it still seems completely sporadic and random. Still, though, I have fun trying to figure them out. Hopefully someday I won’t have to think about it because I’ll be afib free!