You are here: Home / My Afib Journey / Another Atrial Fibrillation Episode (Thank God)

What an interesting day yesterday. I had my initial consult with Dr. Natale down in Austin, TX nine days ago. I’ll be publishing a blog post about my appointment soon. I’ve been really busy so I haven’t had a chance to get to it yet but I will soon (hopefully in the next few days). I’ll give you a hint…Dr. Natale is going to do my ablation!

I didn’t hear from his scheduling office until yesterday afternoon. I had a handful of dates to choose from in January and February and ultimately I decided on February 2nd. As soon as I locked in the date I was feeling really unsure about the whole thing.

I hadn’t had an episode in over two weeks – and the last episode I had was a “minor” one compared to previous episodes. I was honestly feeling like an ablation was overkill at this time. I convinced myself that I wasn’t going to have an episode until I had my ablation.

The exact thoughts in my head were, “Now watch. I won’t have a single episode now until I have my ablation and I’ll be second guessing this decision the rest of my life.” Then my second thought was, “I hope I have at least one more episode before the ablation to remind myself why I’m having this ablation.”

Well as the saying goes, God works in mysterious ways. Just five hours after committing to having an ablation in February, I went into afib! What are the odds of that?

It was 7:50 p.m. and I was sitting on the couch (not lying down) playing Madden on the Xbox with my son. It was 4th down and 15 to go and my team had the ball. I decided to go for a first down instead of punting and I got sacked for a five-yard loss. I leaned forward very quickly and jokingly screamed at my team for giving up the sack. I want to put the emphasis on joking. I wasn’t stressed at all nor was I seriously mad. Both my son and I were laughing. That quick movement forward and the vocal burst set my heart off.

I knew instantly I was in afib but I kept playing for another five minute or so. I got up and grabbed my AliveCor heart monitor to confirm what I already knew: 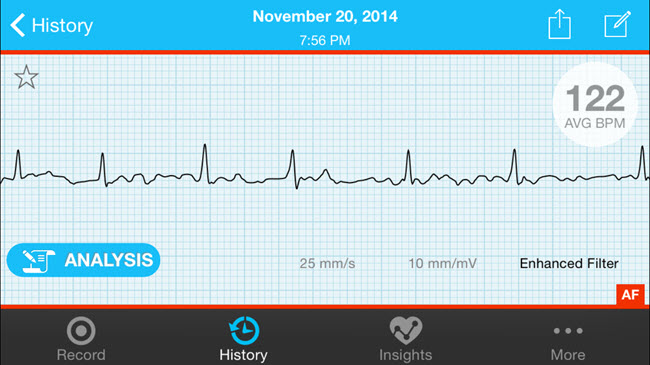 At 8 p.m. I took my 300mg of Flecainide and decided to work on my computer. I find it’s easier for me to get through these episodes if I stand so I worked at my standing computer desk. I was hoping it was going to be a quick and pleasant episode like my last one but no such luck. 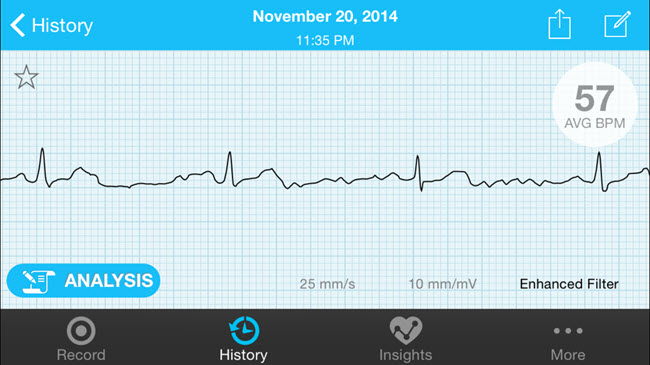 While it wasn’t pleasant, this episode wasn’t that bad at all. In fact I kept up my usual routines and just acted as if I wasn’t in afib. Aside from a few brief moments of feeling slightly faint (mostly when walking upstairs or downstairs), it was totally bearable throughout the night. It was an annoyance more than anything.

There was something interesting that happened, however. Right when I converted at 11:20 p.m. I had this sudden intense “faint” feeling, and my fish-flopping heart and everything around me paused and the room went black for a millisecond. I’ve experienced this before when I’ve taken Flecainide. Every time I’ve had this strange experience I’ve converted to NSR seconds later. I can only guess what’s going on is a chemical cardioversion. The drug is essentially “kicking in” and converting my heart to NSR.

While I wasn’t exactly thrilled to have another afib episode, I was thankful that I had one because it reinforced my decision to move forward with an ablation. Thanks for the sign, God!

I don’t even know why I bother to figure out my triggers because it doesn’t seem to matter. Even when I think I’ve identified a pattern, I’m proven wrong but it’s fun so let’s do it anyway!

Let’s start with one of the usual triggers I think plays a role – sleep. I will admit, today I woke up feeling a different kind of tired. It’s hard to describe but some days I wake up with this kind of “sickly” tired feeling. That’s what I had today. In some of my previous episodes I had this same kind of tired feeling when first waking up in the morning.

Now let’s move on to the next suspect trigger – food. I theorized in some of my previous episodes that a dinner heavy in carbs might play a role. Tonight I didn’t have a “carb heavy” dinner but I did eat slightly more than I should have at dinner. I had two whole-grain hard shell tacos and that was it. Normally I would only have one taco, but even with the two tacos my total calories were only around 500 calories. These were not spicy tacos either so that wasn’t it. Looking back at my previous episodes I did find one where I had eaten two soft shell tacos for a total of 600 calories at dinner. Is there a connection? Possibly…but unlikely;)

The immediate trigger for this episode was the sudden movement forward and me screaming. Now I know what you’re thinking. I had an episode not too long ago where screaming at my monitor immediately triggered an episode. It’s easy to say, “STOP YELLING,” and maybe you won’t have as many episodes…except it’s not that easy.

I don’t want to come across as a guy that is constantly yelling but I do have a tendency to yell from time-to-time. I should be able to yell without going into afib. That isn’t exactly normal. While stressing out (for real or for fun in this case) may be an immediate trigger, there is obviously some underlying factor at play here.

As you can see, there comes a time in your atrial fibrillation journey where figuring out a trigger becomes a moot point. As afib progresses, I don’t think there are any specific triggers. You’re just going to have episodes randomly and there is nothing you can do to prevent them.