You are here: Home / My Afib Journey / A Dream About Afib Triggers an Intense Atrial Fibrillation Episode in My Sleep

I woke up Monday morning at 4:35 a.m. from an intense dream. Ironically, in this dream I was having an afib episode! Is that scary or what?

Aside from the episode I had during a power nap, this was the first time I’ve ever had an episode while sleeping. I hope this isn’t the beginning of a new trend. I’ve always feared having atrial fibrillation while sleeping because I have a hard enough time getting good sleep the way it is. If I have afib to deal with during sleep on top of my insomnia, I’m screwed.

As I always do, I waited a little bit to make sure I was going to be in afib for the long haul. I’m always hoping that I’ll pop out of it within a few minutes but it never happens. At 4:50 a.m. I took a reading with my AliveCor monitor and this one was a doozy: 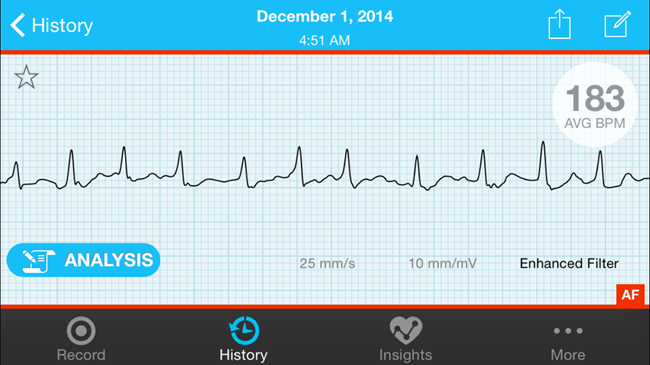 You see that heart rate? And that was just the beginning. This ended up being the most intense episode I’ve had to date. I’m almost certain my heart rate was peaking at 200+ beats per minute at times. I was honestly too scared to even check. I knew if I checked and it was that high, I’d only freak out more and make things worse. What I didn’t know wouldn’t hurt me.

At 4:55 a.m. I took 300mg of Flecainide and 120 mg. of magnesium glycinate. I added the magnesium this time because it was such an intense episode that I wanted to take anything that might help.

For the next hour I sat in my recliner and tried my best to relax and keep my mind off the episode but it was so overbearing I couldn’t escape it. I couldn’t even sit there and watch TV. At one point I got up and put my contacts in and got dressed because I was certain I was going to be taking a trip to the hospital. That’s how bad this one was.

Around 5:30 a.m. I got back into bed and I tried something I thought I would never do because I thought it was hokey but that’s how desperate I was. It’s called entrainment.

Entrainment is a process by which two different rhythms become synchronized. The idea is if you listen to a regular heart beat long enough, your heart will synchronize with it.

I found a sound track of a heart beat online and listened to it on my iPhone. Unfortunately, it wasn’t the ideal track because the heart beat was much faster than I would have wanted and it wasn’t loud enough but it was the best one I could find. At least it was a nice steady beat and not the chaos that was going on in my chest.

I lay in bed with the iPhone inches from my ear, concentrating on the sound and beat of the track. Within five minutes the intensity of the episode decreased significantly but it was still intense. I continued doing this for another fifteen minutes or so. Then an idea hit me.

What if I placed the speaker of my iPhone directly over my heart? After a few adjustments, I was able to figure out the precise way to hold the phone over my heart so that the sound from the phone would actually vibrate my skin (and even my chest to a degree) in rhythm with the beats of the sound track – while still being able to slightly hear the track.

This reduced the severity of the episode even more. In fact I drifted off to sleep doing this! I woke up at 6:35 a.m. with the phone still “beating” over my heart – barely touching my skin. In case you’re wondering how that was possible, before I fell asleep I “spooned” a pillow and simply placed the phone on top of the pillow so that it barely leaned against my chest. This way I didn’t have to sit and hold it.

When I woke up I was 90% sure I was fully converted to NSR. I was too tired to take a reading to confirm it but I’ve had so many episodes I know exactly when I pop out of them. I set my alarm for 8 a.m. and went back to sleep.

Did entrainment work or was it just the Flecainide doing its thing? I’m not ready to say it converted my heart to NSR but I will admit this, it definitely helped to reduce the severity of the SYMPTOMS of my episode.

Before I tried this trick, I was certain I was heading to the hospital the symptoms were that bad. I was feeling faint. I had shortness of breath; the whole nine yards. It was by far the worst episode I’ve ever had.

I tried entrainment and within minutes I felt better. The symptoms were at least tolerable. I knew I was going to be able to skip a hospital trip. Then within 30 minutes or so I drifted off to sleep. I’d say it had a significant positive effect on the symptoms but I doubt it converted my heart to NSR.

I’m really excited because I think I discovered a twist on the traditional entrainment method that can help highly symptomatic afibbers like myself better manage their episodes. Over the next few weeks I’m going to be working on perfecting the method by having my own sound track created. I’ll post an update on this as soon as I get it done.

Who knows at this point and really who cares? My episodes have become so random now that if there is a specific trigger (i.e. lack of sleep, magnesium, whatever), I have no idea how to pin point it.

The only thing I can think of is I was under a ton of “silent stress” the past week for Thanksgiving. I say “silent” because I never feel my stress or act differently because of it. I basically internalize it I guess. The only way I could tell I was stressed out was I had a bad outbreak of cold sores just a few days ago. I literally had four cold sores at once. I only get outbreaks like that when I’m really stressed.

My kids were home from school all week and we were hosting Thanksgiving this year. We were also having family stay with us for a few days. There was just a bunch of stuff going on and my daily routine was getting messed up!

I always get really stressed when people are going to be staying at our house or my daily routine gets interrupted.

But here’s what’s so strange…why wouldn’t I have the afib episode during the peak stressful days? This episode occurred after the storm so-to-speak. I was at the very tail-end of my stress period. I was actually concerned I was going to have an afib episode last week when my stress was through the roof but nothing happened.

This condition drives me freaking crazy!!