You are here: Home / My Afib Journey / My First Atrial Fibrillation Episode While Sleeping

Since I was first officially diagnosed with atrial fibrillation back on Father’s Day in 2006, I have made detailed journal entries of every afib episode I have had. My goal is to get those journal entries on this blog for others to read. I’ve been dragging my feet on that project but today I had an episode so I thought I would go directly to my blog this time instead of my private journal.

My last episode was on August 28th – almost exactly a month ago. My afib has gotten progressively worse this year. Up until this year, I was able to go a good year or more in between episodes. Now I’m getting them about once a month. I knew this would eventually happen as atrial fibrillation is a progressive condition. I was crossing my fingers hoping I’d be one of the lucky ones in that it wouldn’t get progressive for at least a few more years. No such luck for me.

This episode was unlike any other episode I’ve had. It was about 2 p.m. and I was pretty tired so I thought I would take a quick 20-minute power nap. In case you’re wondering, I work from home so I have the luxury of taking a nap if needed. Ten minutes into my 20 minute power nap I was suddenly awakened by palpitations. I knew instantly I was having an afib episode but I didn’t want to believe it. I knew afib episodes during sleep was very common but not for me! What was going on, I wondered to myself.

In addition to my afib getting progressively worse, it’s also becoming very random. I’ve never had an episode when falling asleep! I usually get them when I bend over suddenly. Although I did have an episode back in June this year when I was totally relaxed and just taking an easy stroll in my car.

I lay there for another ten minutes to see if by a miracle I could pull out of it naturally (something I’ve never experienced before so I wasn’t holding my breath). Of course my heart just kept pounding away erratically.

I finally got up and drank 8 ounces of water with 3 teaspoons of Natural Calm, giving me 525mg of magnesium citrate. The last couple episodes I had I took it but I have no idea if it helps or not. My theory is the magnesium might help calm my heart (and me mentally) and it might help the Flecainide be more effective. Then I downed my 3 white pills for a total of 300mg of Flecainide.

I then grabbed my AliveCor Heart Rate Monitor to take an EKG reading. This is the best investment I’ve ever made to help me during my episodes of atrial fibrillation. You simply put your fingers on a couple sensors for 30 seconds and it takes an EKG reading. Then you can send it to a technician right through the app for $5 to have them tell you what the EKG reading is. My reading confirmed that I was in “Atrial Fibrillation with Rapid Ventricular Response and PVCs.” Below is a screenshot of the EKG from my iPhone 5: 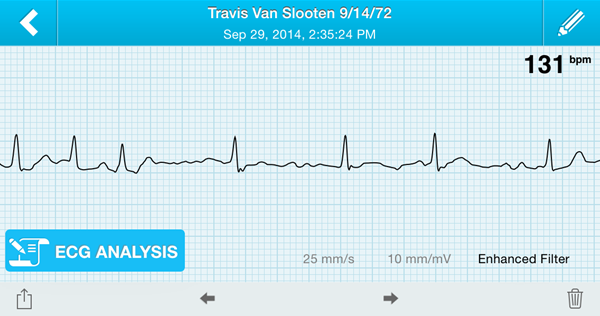 I also thought this time around I would try something different. I took my shirt off and lay on my back and sprayed my chest and stomach literally 32 times with Ancient Minerals Magnesium Oil spray and rubbed it all over. This gave me an additional 400mg of elemental magnesium.

My thinking behind this strategy was that the oral magnesium probably doesn’t get absorbed that much because it usually gives me diarrhea (an indication that most of it is just passing through my system). If most of it isn’t being absorbed, then I have a backup with the spray as I’ve been told most of it does get absorbed through the skin. Magnesium spray is really messy and very oily so I just lay still on my back for about 20 minutes and then I wiped off what didn’t fully absorb.

At that point it was just a waiting game. The last two times I used Flecainide I converted in 2 hours so I figured it would take at least that long. During this time I just lay in bed and listened to my usual talk radio shows and checked emails and did my work on my laptop.

Around 4 p.m. I got out of bed to go to the bathroom. When I stood up, I almost fainted. It was the most bizarre feeling I’ve ever experienced. For a split second the room went dark and I felt myself getting very weak. Luckily it only lasted a split second so I continued to walk to the bathroom. As I was standing above the toilet getting ready to unbutton my pants, it happened again. I suddenly felt really weak and the room started to go dark on me again. I immediately lay down on the bathroom floor just in case I was about to pass out. As quickly as it came it went. I got back up, went to the bathroom, and walked as fast as I could back to the bed.

Something strange was going on because I was having some pretty intense palpitations and even while in bed I felt light headed and felt as if I was going to pass out. I thought I better take another EKG reading to see what the hell was going on because all of this was new to me. The EKG technician confirmed the same thing as earlier (Atrial Fibrillation with Rapid Ventricular Response): 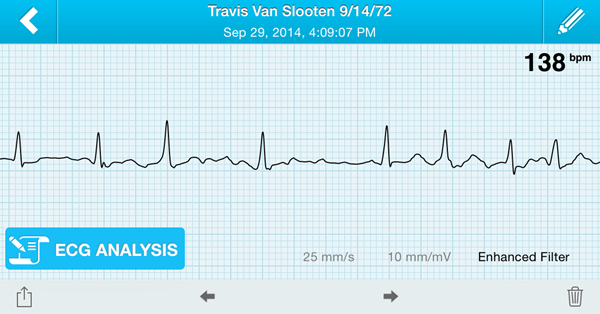 The next 20 minutes was really rough – so rough that I called my wife and told her she might want to come home and take me to the hospital. I told her I didn’t think the Flecainide was working and I wasn’t doing so well. This never happened the previous times I took Flecainide so I wonder if maybe it was all the magnesium I took. I never used the spray before so maybe that’s what was causing things to go super crazy this time. I have no idea.

Magically around 4:30p.m. – almost exactly 2 hours after I downed the Flecainide – my heart started to settle down and within minutes I felt totally normal! I was so relieved because I did not want to go to the damn ER. Electrical cardioversions are a pain in the ass and super expensive. My last one was over $4,500.

And my kids were home too so I didn’t want to have to explain to them daddy was going to the hospital to have his heart shocked. They don’t know their dad has atrial fibrillation. I haven’t been able to work up the courage to tell them yet. I don’t want them to worry. It’s bad enough my wife knows. She freaks out way more than me when I have episodes. I don’t need a house full of people freaking out over me.

I stayed in bed continuing to work on my laptop for a couple hours and took a final EKG reading at 6:30 p.m. to confirm I was still in NSR. The EKG reading confirmed all was good:

I’m just crossing my fingers that I can go at least another month before the next episode hits. I guess the good news with this latest episode is that it pushed my to get an ablation done asap. Luckily I have an initial consult with the great Dr. Natale in Austin, TX in November. That was going to be an appointment to ask him if I should have an ablation now or wait a while longer. Now the conversation is going to be, how soon can you get me on the table! I am going to have an ablation as soon as he can get me scheduled.

One thing I always do when I have episodes is take notes of any potential triggers. Some people have very specific triggers for their atrial fibrillation. I haven’t been able to identify any specific triggers to date but it’s always fun to play doctor and try to see if there are any patterns.

Then Saturday night I got about 8 hours of sleep and I felt absolutely fantastic on Sunday. In fact, I can’t remember the last time I had so much energy! Sunday night I got about 5 hours of sleep (my usual) so on Monday I felt o.k. But around 2 p.m. I hit a brick wall and that’s why I decided to take a quick power nap. Then boom, I had my episode so maybe the lack of sleep the past week led to this episode.

The other potential trigger was my diet and recent weight loss. I have radically changed my diet the past 2 months. I have been eating healthier than I have my entire life. I’ve lost 18 pounds as a result! This new lifestyle only has me eating about 1,500 – 2,000 calories a day. I say “only” because I used to consume 2-3 times that every day. Could it be that this radical change in my diet and the weight loss has thrown my body chemistry out of whack?

Oddly enough, I had an atrial fibrillation episode when I was on a Medifast Diet a couple years back. During that time period, I was only consuming 800 calories per day and I lost 32 pounds. Maybe there is a connection with the calorie reduction and subsequent weight loss? Who knows.