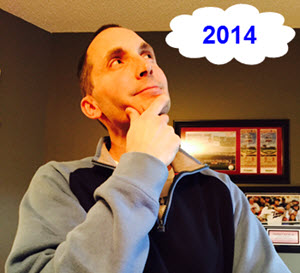 Well it’s December 31, 2014. What a hell of a year it’s been for me. I started the New Year with a trip to the E.R. to be electrically cardioverted. It would be my fourth electrical cardioversion.

I was lucky enough to go almost five months after that without an episode. During that period I finally got smart and got a prescription for Flecainide so I could try the pill-in-the-pocket approach. I was able to put it to the test in June. It worked flawlessly and changed my entire outlook on my afib episodes. While I was discouraged I had an episode so soon after the previous one, I was no longer afraid of having an episode because with Flecainide in my pocket, I would no longer have to cart my butt to the E.R. to be shocked.

I had no idea that June episode would only be the beginning of several more to come. If someone would have told me then that I’d have 10 more episodes of atrial fibrillation I would have said you’re crazy! And I would have never dreamed I would be flying to Texas to meet with Dr. Natale to discuss having an ablation. A lot happens over the course of a year!

As 2014 comes to a close I’m crossing my fingers that the New Year won’t welcome me with an afib episode. Unfortunately, looking at my track record I’m due for one any day now. I’m just hoping that day isn’t tonight or early tomorrow morning. Even if I’m lucky enough to escape an episode in the next 24 hours, I’m sure I’ll be writing a post within a week describing yet another one.

As I look forward to 2015, I’m not too optimistic. With any luck, I’ll be able to maintain my schedule of one episode every week or two until my ablation in March. Hopefully the Flecainide will continue to work as well. I’m going to be severely depressed if my episodes become more frequent than that or the Flecainide stops working and I have to be cardioverted in the E.R. every time I have an episode.

Then I have to start on blood thinners for the first time in my life in February in preparation of my first ablation. I’ve read so many horror stories of these blood thinners that it turns my stomach even thinking about taking them. Granted, I’ll “only” be on them for four months (one month prior to the ablation and three months after) but to me that’s an eternity.

Then I have the ablation on March 5th. While I should be excited about that, I’m not. I have a bad feeling it’s not going to work and I’ll need a second one in the summer. I’m also nervous about the potential side effects of the procedure and the recovery I’ll have to endure.

For the most part, I am writing off the first half of 2015. I’m expecting those six months to be hell and the worst months of my life. I’ll be battling episodes until the ablation and then I’ll be on blood thinners and probably Flecainide on a daily basis as well. Then I’ll be recovering from the ablation – and then likely more episodes after that leading to a second ablation that I’m sure I’ll need in the summer. Fun stuff.

What can I say? I’m a bit of a pessimist. Regardless of how it turns out, it will be interesting to see what I post here come December 31, 2015. Will I be looking back at a year from hell or will it be a good year? Only time will tell, I guess. With that, “Happy” New Year and I wish you all NSR in 2015!