You are here: Home / My Afib Journey / Catheter Ablation Insertion Spots: One Poke In The Neck and Two In The Groin

The only part that was uncomfortable was the tape they use to keep the swabs in place. I have no idea what kind of tape it is but it almost fuses with your skin as you can see in the pictures. The tape on my neck was really uncomfortable but luckily they were able to take that one off the night of the procedure.

The two on my groin had to stay put until the morning after the ablation. The tape on those weren’t uncomfortable at all – until I had to take them off. I’ll tell you more about that in a minute.

These pictures were taken shortly after my procedure. Click the images for larger pictures. 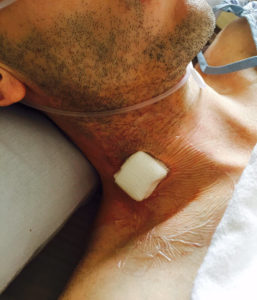 They inserted a mapping catheter in the neck and essentially parked it in the right atrium and coronary sinus to get a more global view of the left and right atrium. 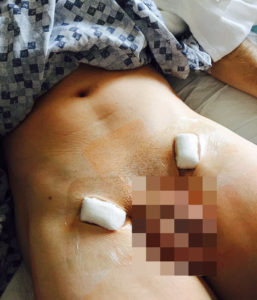 The left femoral vein had the ICE camera that was parked in the right atrium. The right femoral vein had two catheters, the ablation catheter – the one that does the actual burning via radio frequency, and a mapping catheter used to map specific target areas like the pulmonary veins and posterior wall as well as focal triggers found elsewhere in the left atrium.

Shannon is one of the smartest guys I know and in my opinion should have a PhD after his name. He’s a walking encyclopedia when it comes to atrial fibrillation and these ablation procedures. He also happens to be one of the nicest and kindest guys I have ever met. I felt extremely fortunate to have him “in my corner” during this entire experience. Without him guiding me along the way, I would have been lost! If you want to tap into his knowledge, and the knowledge of many experienced affibers, be sure to participate in the afibber forum.

As I mentioned earlier, the tape they use almost fuses with your skin. At first glance, you can’t even see the tape. You would think it would be really weak stuff but it’s surprisingly very strong. When they took the tape and swab off my neck it came off with ease. Remember, they did that the night of the ablation so it was probably 12 hours or so after the procedure.

I didn’t attempt to remove the tape and swabs off my groin until the following night – the night after the ablation. They told me to remove those when I took a shower and to scrub them off with soap. The way they described it I thought I would just hop in the shower and they would come right off. It didn’t work that way at all.

At first when I got in the shower the water just rolled off the swabs. I didn’t realize they were covered in this magical tape. I then made the mistake of grabbing one of the swabs and pulling it, thinking it would just rip right off. The tape was so infused with my skin and so strong that I pulled my skin and consequently the insertion hole and it hurt like hell! I thought for sure the hole would start bleeding but luckily it didn’t.

Long story short, I had to kill the shower and literally pull and peel the tape off bit-by-bit. I won’t tell you how many curse words I used. I was extremely frustrated at the amount of time and effort I had to put in to removing two swabs from my groin! It took a solid ten minutes to remove the tape and swabs. When they finally came off I hopped back in the shower and all was well. My insertion holes were perfectly fine without any blood or oozing of any kind (something they said to watch for).

Some Simple Tips on How to Prepare for These Insertion Holes

I knew they were going to have to shave my groin area so I decided to take matters in my own hands. I shaved my entire groin area myself prior to the procedure. I wanted to make sure all of my hair was removed and that everything was uniform down there if you know what I mean. I didn’t want blotches of shaved hair!

I have a very hairy chest so I shaved that completely as well prior to the procedure. They put tape all over your chest for the EKGs they take so I figured I would make it easy for them and myself by removing all my hair. I also wanted to prepare for any possible cardioversion after the procedure.

If you’ve had a cardioversion you know they shave your chest for the paddles they put on you but when they do they just shave two spots where the paddles go. Again, I wanted a uniform look without any blotches of shaved hair so I just shaved everything myself.

The one thing I didn’t do which I wish I would have was shave the inside of my arms. They put an IV in you the morning of the procedure and it stays there until you leave. If you have hair on the inside of your arms, you’ll have to deal with them pulling the tape off when they remove the IV. It’s obviously nothing super painful but with a couple swipes of the shaver I could have had zero discomfort when they removed the IV tape. Again, it’s no big deal but if you don’t like having your hair pulled out by tape shave the inside of your arms!

The tape on your groin spots will be virtually invisible and will be fused to your skin so don’t try pulling the swabs off like I did. I was lucky my one spot didn’t start bleeding when I did that. Even if you can’t see the tape it’s there so take it off slowly and carefully.

Finally, you will be instructed not to lift anything over five pounds and no driving for a few days after the procedure. This is to prevent any pressure on these wounds as they heal. This was kind of a bonus as I got to chill for a few days as my wife catered to my every need. “Sorry honey, but I can’t lift anything so can you pick that up for me?” Don’t get used to this as it only lasts a few days! I love you honey;)