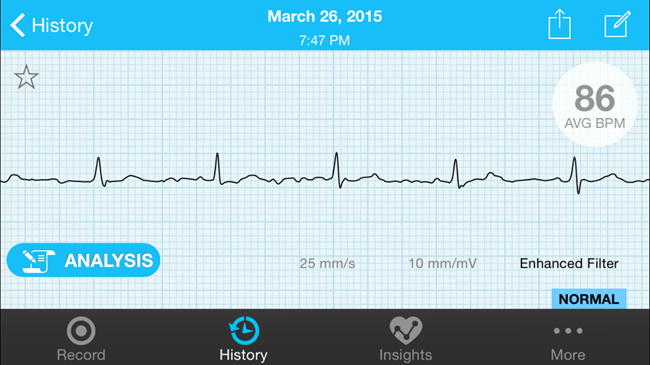 This past week has been great! Absolutely no issues to report with my heart or my overall health. My heart rate continues to beat in the 80’s – more than 30 beats per minute more than what my heart rate was prior to my ablation (52 beats per minute) but that’s o.k. I don’t even notice a difference and I know it will eventually come down over time.

My weight is stable at 175 pounds and I haven’t changed anything from my supplement regimen outlined in my week one update. I also took it easy this week. I didn’t do any exercising or really anything to get my heart rate up. I will continue to remain mostly inactive until mid-April.

A couple weeks ago at the urging of Mellanie True Hills at StopAfib.org, I decided to take the plunge and schedule an appointment with a sleep specialist to discuss having a sleep study. Mellanie said that even though I’m at a very low risk of having sleep apnea, “skinny people” like me can still have it and not even know it. She said 70% of sleep apnea goes undiagnosed.

The reason she recommended I get tested is because there is a strong connection between atrial fibrillation and sleep apnea. If you treat sleep apnea you can usually significantly reduce the severity and occurrence of afib. And if you have an ablation with undiagnosed sleep apnea, your chances of beating afib with the ablation go down significantly. Mellanie said to ensure I have the greatest chance of success with my ablation I should make sure I don’t have sleep apnea!

I’ve always known about this connection but have put off having a sleep study because the whole thing sounds silly. You go to a clinic to sleep over night while they literally study you sleeping. You’re in a totally strange room with a bunch of sensors hooked up to you and a technician monitoring you and you’re expected to have a good night’s sleep. Like that’s going to happen. News flash: I have perfect sleeping conditions in my own bedroom and I have a perfectly comfortable bed and I can barely get a good night’s sleep!

At any rate, I had my initial consult with a sleep clinic this week. I expressed my concerns about not being able to sleep for the study so the nurse said I could do an in-home study. At first I was all over that option but as she explained more about it I decided it wasn’t a good option after all. Apparently the in-home studies trigger a lot of false negatives, which would require a follow up in-lab sleep study anyway. Furthermore, home studies don’t diagnosis other sleep disorders. They only diagnose sleep apnea.

I figured if I was going to do this I might as well do it right so I signed up for the full blown in-lab sleep study. I’ve been suffering with insomnia for almost a decade so I thought it would be good to find out what the heck is going on in my head (and possibly body) that is preventing me from getting a good night’s sleep.

They told me I could take a sleeping pill (specifically Lunesta) but I have my doubts. Those sleeping pills rarely work for me. And truth be told, I think it’s odd that they would allow you to take a sleeping pill as I would think that would affect the results of the study. Those pills change your sleeping cycles so wouldn’t that affect the diagnosis of various sleep disorders? Something just doesn’t sound right about it.

They have to submit to my insurance company first for authorization so they said that could take 2-4 weeks. Then who knows how long after that it will be before they can get me scheduled for the study. I’m really torn on this whole thing because it has disaster written all over it as I doubt I’ll sleep long enough for them to get enough data to do a diagnosis.

I’ve also read that these studies aren’t cheap with costs running close to $5,000 (or more). We have a very high deductible insurance plan so that entire cost would be out-of-pocket! Do I spend that kind of money or do I opt for the slightly cheaper, but not nearly as accurate, in-home study? Or do I say screw it and scrap the idea of being tested all together since my chances of actually having sleep apnea are so low? I’ve got a few weeks to mull this over.

What would you do? Tell me in the comments below!