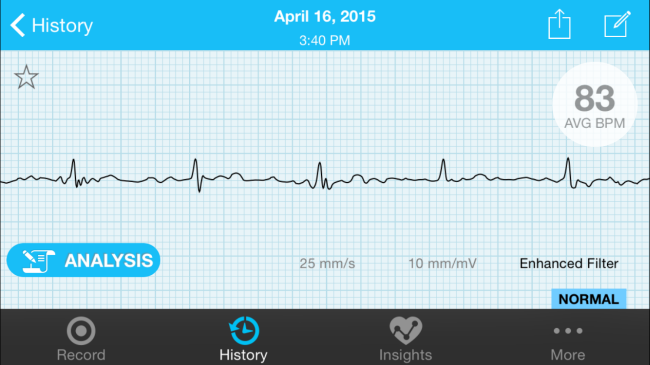 Well it was another non eventful week – no afib or heart palpitations of any kind since the ablation. My heart rate continues to be in the 80’s. Again, I’m not concerned about the elevated heart rate. I actually welcome it. I just find it interesting that it hasn’t budged much since the procedure.

The weather has been really nice this past week so I’ve been spending a lot of time outside playing catch with the baseball and softball with my kids and shooting hoops. I haven’t been doing anything too crazy but I’ve definitely been more active then in week’s past. In fact I can safely say this has been the most active week since my ablation. I haven’t broken a sweat yet or anything like that but I have been more active that’s for sure.

I was originally going to go back to the gym next week but I’ve decided against it. I’m going to give my heart a full two months to recover from the ablation before I do any kind of “official exercising.” I know I’m being way over-cautious but I would rather be safe than sorry. I just got an email from a reader who started exercising just 10 days after his ablation and he went into afib for 2 hours. I took that as a sign from God as a reminder to just take things easy during this blanking period. I’ve got my whole life to exercise again!

Despite not exercising I’m down three pounds this week so I weigh 172 pounds now. I still can’t believe I can fit into 34 inch pants and they are even slightly loose! It’s been over fourteen years since I’ve been able to fit into 34 inch pants. I’d like to get down to 170 pounds but I’m fine if I hover between 170 – 175 pounds.

I also heard back from the sleep clinic. They finally got approval from my insurance company to do a sleep study. I’m not so sure I’m going to go through with it. I need to call and find out exactly what this is going to cost. It’s not just the cost that has me second guessing this study. I’m 90% certain I don’t have sleep apnea so the whole thing seems like a major waste of time. I’m looking into alternative ways to test for sleep apnea myself. I’ll be posting about that in the near future.

I also had an appointment with an integrative doctor this week. I met with him to discuss my low magnesium levels that were discovered from my EXATEST. This particular doctor does IV magnesium treatments so that’s why I decided to make an appointment with him. When he saw my results, his eyes practically popped out of his head as he said, “Those are pretty low levels!”

He said I had three options to boost my magnesium levels: (1) administer at-home “magnesium shots,” (2) come to his office for weekly IV treatments, or (3) take more oral magnesium supplements.

Option one was out of the question. There is no way in hell I’m giving myself shots, especially when he told me they can be painful sometimes. Ya, sign me up for that…NOT! I’m already doing option three but obviously that’s not enough. That leaves me with option two. I was all over option two before I even met with him, however, he thinks I would need two IV treatments a week for two months!

I have two concerns about this. One, his office is 35-40 minutes away from my house and the initial treatments can take up to 90 minutes each. I don’t have the luxury to take that much time off each week to have IV treatments. Second, he charges $85 per treatment, which isn’t too bad if you were only doing one a week, but at two treatments per week for two months you’re looking at $1,360!

Like the damn sleep study, I’m torn now on what to do. I definitely think I could benefit from the IV magnesium but I don’t think it’s a realistic option right now – at least not with him. I’m going to talk to him about doing one treatment per week. I’m also going to dig a little deeper to see if there are any doctors closer to my home that do them. If this doctor doesn’t think one treatment per week will be enough, or if I can’t find a doctor closer to my home to do them, then I’m probably stuck with oral magnesium supplements for now.

Wouldn’t it be nice of every traditional doctor offered alternative treatment options? It drives me crazy that I have to hunt around like this and pay through the nose to find someone to administer simple IV treatments. I should be able to call my family doctor and tell him I’m willing to do these even if he thinks they are pointless or there are risks involved. It’s my body and my health for crying out loud.

So the “health journey” continues. I’m just happy for now I’m afib-free and life is good. I’m not in a terrible rush to tackle some of these other health-related issues but I would like to be done with them sooner than later. My goals by summer’s end are to have the sleep apnea and magnesium deficiencies solved. Wish me luck!