You are here: Home / My Afib Journey / Talking PACs and PVCs During My Latest EP Visit 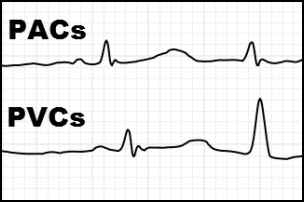 A few weeks ago I had my annual checkup with my local EP. He’s a terrific doctor and someone I thoroughly enjoy talking to. He’s always so gracious with his time and very easy to talk to. This last appointment was no different.

Before my appointment with him I had an echo done. This wasn’t required as I had one last year but I demanded to have another one. I’m a bit of a hypochondriac and since I’ve been having so many PVCs and PACs this past year I wanted to have one done just to make sure my heart was doing o.k.

I was an absolute nervous wreck the days leading up to my appointment because I was certain the PVCs and PACs I had been battling the past year were causing damage to my heart. Did I mention I was a hypochondriac…lol? Actually, I’m not really that bad except when it comes to my heart. Watching my dad die from heart failure just a little over a year ago really made me a paranoid person when it comes to my heart so I always think and assume the worst. I fully admit I need to work on adjusting my mental attitude with regards to my heart, by the way.

My nerves got so bad that the 24 hours leading up to the appointment I had the worst PVCs and PACs I’ve had to date. My AliveCor monitor was showing 12-15 PVCs and PACs per minute at times. My heart felt like it was going to explode out of my chest – and it was pretty much nonstop. I was having problems sleeping too because my heart was pounding so much. It was awful.

When I lied down to have the echo done my heart was still pounding out of control so I told the technician that she’s probably going to notice my heart jumping all over the place. She just smiled and said that was perfectly fine and she said that they wouldn’t affect anything she was going to do.

The echo didn’t take long to complete, maybe 20 minutes at the most. My appointment with my EP was about an hour after the echo so I had some time to kill. I went out to my car to have a quick snack and to try to relax before my appointment with the doctor. The break helped as my nerves and heart settled down a little but I was still a wreck.

Talking to the Nurses

Before my doctor came into the room, a nurse came in to do all the preliminary things like take my heart rate and my blood pressure. Both were perfectly normal: 70 bpm & 114/68 respectively.

After that was all done, the main nurse came in to talk to me for a little bit. She was also very nice and easy to talk to. She looked at the ECG and just said that I was having PVCs and PACs but she wasn’t concerned about anything. While they may feel awful, she said, I wasn’t having so many that she was concerned. That was a relief.

My Talk with My EP

After my brief talk with the nurse, my EP came into the room. I felt bad for him because I was the last appointment of the day (5 p.m.). I hate being the last appointment of the day because you never know what kind of mood the doctor is going to be in after talking to patients all day. My doctor was a real pro, however, and he was just as fresh and happy as if I was his first patient of the day! And he didn’t rush me either. He gave me as much time as I needed, which ended up being about 45 minutes.

The first thing he told me was that my echo looked great! He said my heart was perfectly healthy and strong. My ejection fraction was 60-65%, which is about as good as it gets he said. He said anything over 50 is considered normal and anything in the 60-65% range is considered ideal. Instantly I felt a ton of weight lifted from my shoulders!

He then looked at my ECG and repeated what his nurse said. I was having a fair amount of PVCs and PACs but they were benign and I had nothing to worry about. He also reiterated the advice his nurse gave me, which was to take a low dose of Flecainide if my PVCs and PACs are really bad.

I asked him about taking a beta blocker to tame these PVCs and PACs and he didn’t advise that because of the side effects. He joked that if he prescribed a beta blocker, I would probably be very mad at him and curse him out. He said the primary reason being that they can make you very tired. He said it wasn’t worth “knocking me out” just to knock out the PVCs and PACs.

In his experience, he has found low dose Flecainide to be the most effective when dealing with PVCs and PACs. Given my disdain for any of these heart drugs, which my doctor is well aware of, I told him I would think about taking the Flecainide. We both chuckled as we both knew that was code for, “Thanks, but no thanks. I probably won’t take the Flecainide.”

He then demonstrated how PVCs and PACs work using a heart model that was sitting on his desk. He showed me how a normal heart works and then what happens when you have PVCs or PACs. What happens is a single cell in the atria or ventricles triggers a beat when it’s not supposed to. It’s basically a rogue cell that beats out of turn. It’s “defective.”

What I was fascinated about the most was that it was a single cell causing all this trouble. When you have a number of PVCs and PACs, it doesn’t feel like one cell is causing all the trouble. It feels like multiple cells in your heart are revolting!

He said the good news is that in his experience, 50% of the time PVCs and PACs will go away on their own within two years. What usually happens is the defective cell will either die or repair itself. I’m hoping this will be the case for me!

You’re not going to believe this, but within an hour of my appointment – the time it took for me to drive home from my appointment – my heart completely calmed down. The nonstop PVCs and PACs I had been experiencing the 3-4 days prior was history. It was like a switch was turned off and the PVCs and PACs just shut down. This totally confirmed that my PVCs and PACs, especially when they get really bad, are totally stress-induced!

It’s been three weeks since that appointment and other than an occasional PVC or PAC here and there, my heart has been totally calm. It’s possible I’m still having regular PVCs and PACs and I’m just not feeling them. I don’t know because I haven’t been using my Kardia monitor.

I’m fearful if I use the monitor and I discover that I’m still having as many PVCs and PACs as usual it might stress me out and make things worse. As long as I hardly feel them and my heart is mostly calm, I’m good. Sometimes ignorance is bliss:)

I’m just so happy and grateful to God that despite my occasional battles with PVCs and PACs, I’m afib-free and my heart is healthy and strong! Unless something unexpected happens in the next year (i.e. my atrial fibrillation returns), it should be a quiet and peaceful year as far as my heart goes (knock on wood).