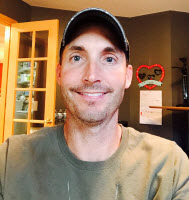 Aside from the epic post I wrote about a month ago about my dad’s death and the possible role atrial fibrillation might have played in his passing, I haven’t posted an update since July. The reason is, for the most part things have been going great so I haven’t had much to write about.

Yesterday marked the official six-month anniversary of my ablation so I thought I would post an update. As luck would have it, I just happen to have a lot to write about!

Bad Habits Are Hard to Break

As I suspected would happen, some of my bad habits have crept up on me. I’ve been eating more than I should and I’ve been eating a lot of junk. Shortly after my ablation I weighed 169 pounds. In the past six months I have gained just about ten pounds as my weight now fluctuates between 177 – 179 pounds. I’m not happy about that so I’m determined to get more disciplined again with my diet. My goal is to be somewhere between 170 – 175 pounds.

I have also gone back to drinking but not nearly as much as I was prior to my ablation. Before my ablation I would have my nightly cocktail (vodka/7-up) and would usually have an additional cocktail on Friday and Saturday. I stopped drinking completely in preparation of my ablation and stayed off all booze during the blanking period.

I didn’t start drinking “regularly” again until about two months ago. Now when I drink I only have a cocktail (sometimes two) on Fridays and Saturdays. I’m not drinking anymore during the week. I only detail this because I think it’s important to know that I still drink even though I have afib. For me alcohol isn’t a trigger for afib so I’ll continue to enjoy alcohol until it becomes a problem.

After literally watching my dad die I have come to the realization that life is too short. It’s bad enough that I have to constantly worry about my atrial fibrillation. I’ll be damned if I’m going to let it prevent me from enjoying an occasional cocktail. I’m not one of those guys that’s going to strive to live a perfect life in hopes that I’ll beat my afib. I’ll make obvious adjustments in my life when absolutely necessary but until then I’m going to enjoy life. Screw afib. I’m having a drink when I want to!

I’ve been so busy the past month with various family things that I’ve only been able to get in my 30-minute walks a few days per week – and in the past couple weeks I’ve only gotten them in a couple times per week. Other than that, I haven’t been exerting myself.

My days of being a hardcore workout guy are over and I’m perfectly fine with it. As long as I can get my walks in most days and can control my diet, I’ll be perfectly content.

I posted a few months ago that I was having a number of PVCs and possible PACs as well. They have continued off and on since that update. Fortunately, I’ve had more good days than bad – until the past few weeks that is.

About three weeks ago we returned from our family vacation. The vacation was great as all was quiet regarding my heart. But then about a week after we returned I started having some “serious” issues. I was having palpitations so bad on some days that I felt I was having an afib episode. It wasn’t afib, however, as I took a number of AliveCor readings and they always came back perfectly normal. I did see some PVCs in the EKG readings.

In addition to these intense, all-day-long palpitations (that at times felt WORSE than an afib episode), I was also feeling light headed and faint. One particular evening I was out shooting baskets with my daughter and when I jumped up to make a shot and came back down to land on my feet I almost blacked out! I went immediately to my knees and everything around me starting to black out. I was on the verge of totally fainting. That episode totally freaked me out.

For about a week straight I had those intense palpitations and faint feelings. It got to the point where I was afraid to go anywhere because anytime I sat up, stood up, or moved I felt like I was going to faint at any moment. Basically anything I did other than lie down, I had palpitations and was light headed and “faint.” Fortunately, I never came close to fainting other than that night shooting hoops with my daughter, but I always had the feeling I was going to faint at any time.

Naturally I started panicking, which I think just made everything worse, so I reached out to my “afib mentor,” Shannon, of afibbers.org. He calmed me down and assured me all would be well. He also read a bunch of my AliveCor readings and said everything looked fine other than a few PVCs here and there.

Dr. Natale and the 7-Day Holter Monitor to the Rescue

While Shannon helped calm me down, I wanted to make sure I was o.k. so I called Dr. Natale’s office. After explaining my symptoms to his nurse, she consulted with Dr. Natale. He thought it made sense to have a 7-day Holter monitor sent to me again so we could see what was going on. If you recall, I had to wear this same monitor shortly after my blanking period.

The monitor arrived Thursday afternoon on September 3rd. I decided to wait until Friday morning to put the monitor on. Wouldn’t you know it, I’ve had the monitor on now for almost three days and I haven’t had a single heart palpitation! It’s like when your car isn’t working right but when you take it in they can’t find anything wrong with it because it runs perfectly. How frustrating!

I have four more days with the monitor so we’ll see what happens. With my luck everything will be perfectly quiet and then the minute I send the monitor back I’ll be having palpitations and fainting spells again…lol.

After numerous back and forth emails and texts with Shannon, I think a lot of these palpitations and symptoms are psychosomatic. It all adds up. When I was on vacation I was totally fine. Why? Because I wasn’t worrying about anything. I was relaxing.

Then I return from vacation and shortly after I start having all kinds of symptoms – only for them to completely disappear after I put the monitor on. As I told Shannon, the monitor is likely a mental security blanket for me. A total sense of calm did come over me when I hooked the monitor up.

Worrying and anxiety runs rampant in my family. My grandmother was a nervous wreck and suffered from severe anxiety all her life. Her daughter, my mom, also has anxiety. Her brother has anxiety too. Lucky me – I have anxiety and afib in my blood line!

I was never a nervous person nor did I ever suffer from anxiety until Father’s Day in 2006 – the day I had my first afib episode and had to be carted to the hospital in an ambulance. I was able to keep my anxiety at bay for the most part despite my afib but it got progressively worse as we started having kids and my afib slowly started getting worse over the years.

I guess without even realizing it I have become my grandmother – a nervous Nelly and anxiety freak! If I’m honest with myself I guess I do worry a lot about my afib and my health in general. Watching my dad literally die before my eyes from heart failure certainly hasn’t helped.

I think my dad’s death has had more of an impact on my mental state than I realized. I suppose subconsciously I’m scared to death about my own heart health and worry a great deal about my future. And like Shannon told me, after you go through something traumatic or tragic in life, sometimes there can be a delay in the mind and body in response to those events. Maybe now I’m just finally starting to process my dad’s death and so mentally and physically I’m responding by having palpitations and everything else!

Shannon is a big believer in meditation and yoga for general health but he especially recommends it for afibbers. There are studies that show the positive effects yoga has on the management of atrial fibrillation. He’s been encouraging me to take up both meditation and yoga. They are now officially on my bucket list. Over the coming weeks I will be looking for classes (online or offline) on how to meditate and how to do yoga as I’ve never done either one before.

I’m also considering seeing a shrink. I think it would be beneficial to talk to someone to help sort out things in life and to help me get a more positive perspective on things. After all, I’m six months post my ablation and aside from these recent palpitations, I’ve had nothing but solid NSR. I should be jumping for joy and enjoying life and taking advantage of every moment I have in NSR. Instead, I just find myself worrying when my next attack will be and when I’ll need a second ablation.

Well, my friends, that is the current state of things. I’ll be sure to post an update after my 7-day heart monitoring is over and I get the results from Dr. Natale’s office. I have a funny feeling they’ll have nothing to tell me other than I’ve had nothing but solid NSR with a few PVCs here and there.

That would be great if that happens but I just hope that my symptoms don’t come roaring back the minute I send the monitor back! We shall see what happens. One day at a time, I guess.