You are here: Home / My Afib Journey / The Battle Against the Beasts – PVCs and PACs Continue 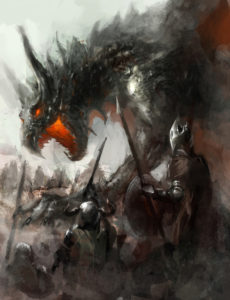 This picture says it all. This is how I feel some days when I’m “under attack” by PVCs and PACs. More on that in a minute.

It’s been a while since I posted about my one year anniversary of being free of afib so I thought I’d provide an update.

The great news is I continue to be free of atrial fibrillation and for that I’m so happy and grateful for. After being afib-free now for over 15 months I’m almost to the point where I don’t worry about having another episode. I said “almost” because that dark cloud still lingers over my head. I don’t suppose that will ever go away completely until they find a true cure for afib.

As those of you who are enjoying a life free of afib because of a successful ablation know, we are essentially in a period of remission. We pray to God that it will be in remission for good but like a cancer patient in remission, there is always the chance our condition can come roaring back to haunt us. I’ve always said if I can buy at least five years of afib freedom from my first ablation I’ll be thrilled so we shall see what happens. For now I just enjoy each and every day I’m blessed without afib (and without having to take drugs either)!

Those Nasty PVCs and PACs

I’ve posted in the past (here and here) the battles I’ve had with PVCs and PACs since my ablation. Well, today the battle continues. I have a string of really bad days and then I’ll have a few decent days and sometimes I’ll even have days where I don’t have any PVCs and PACs; or at least I don’t feel them. Those days are far and few between but they are glorious!

On the bad days it’s hell. It’s almost as bad as being in afib. I just feel like crap all day and it really gets me down mentally. I do my best to stay positive but it isn’t easy. I just pray during those times and try to have total faith in God that I’ll be o.k. and that someday He’ll cure me of these palpitations.

I honestly don’t know why I have them. I don’t know if they are some kind of side effect of the ablation or if they’re just yet another heart issue I have to deal with. I tend to think it’s more of the latter. It’s easy to point to the ablation as the culprit since I never had nagging PVCs and PACs before the ablation but I’m just not convinced the two are connected.

I didn’t have any PVCs or PACs immediately after my ablation. They didn’t kick in until about four months after my ablation. Furthermore, they seem to have only gotten worse over time, which provides further evidence these aren’t likely connected to my ablation but who knows.

Even if they are, it’s water under the bridge at this point. What’s done is done and I wouldn’t do anything different. I’d gladly exchange a life free of afib (and drugs) for nagging PVCs and PACs – so long as they aren’t so bad they lead to heart failure!

If 20% of your heart beats are consistently (and that is the key) PVCs and/or PACs, this is when doctors start to get concerned. At 20%, you run the serious risk of heart failure. Usually at this point doctors will intervene with drugs or an ablation.

Fortunately, I’m not there. I use my AliveCor monitor regularly on my “nasty days” and I’ll have anywhere from 6-9 PVCs/PACs per minute. With my resting heart rate of 60 beats per minute that puts me around 13-15%. Yes that’s high, but not at the 20% threshold. And even on my nasty days I don’t think I’m having that many every single minute for hours on end.

If I start having a lot more nasty days than o.k. days, or if on my nasty days I start approaching 20%, I’ll definitely be calling my doctor to get a 30-day monitor so we can see exactly how bad they are and come up with an appropriate game plan. For now, I’m just trying to ignore them and live my life.

I’m going to continue to try to pin point what might be triggering these PVCs and PACs. I don’t know if it’s the supplements I’m taking, my diet, or if they’re just random like my afib was leading up to my ablation.

If they continue to get worse, as I mentioned I’ll be making a call to my local EP to get a 30-day monitor so we can see what is going on. Hopefully it doesn’t come to that but if it does it does. I’m confident that these will either settle down themselves or I’ll find a way to defeat them…or just live with them.

I hope everyone reading this is doing well. Feel free to reach out to me if you have any questions about your afib or just want to connect with a fellow afibber. Take care and God Bless!