You are here: Home / My Afib Journey / You Know Things Are Going Well When You Miss Your 2-Year Anniversary 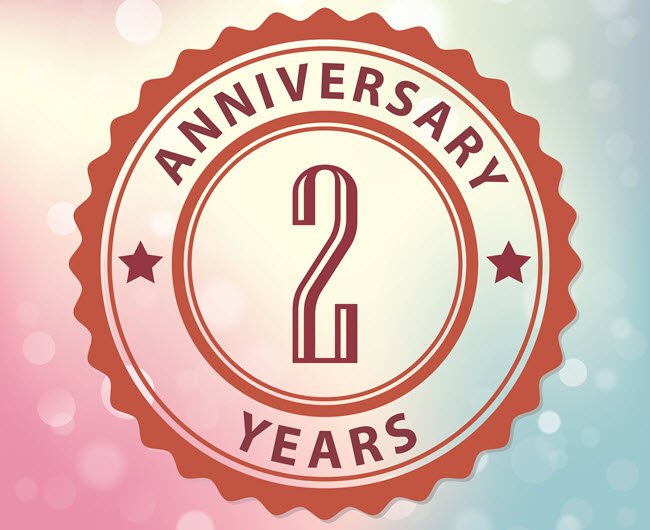 I can’t believe this but it’s March 17th (Happy St. Patrick’s Day by the way)! I had my ablation on March 5, 2015. Things have been going so well the past two years (well besides those pesky PVCs and PACs I battle from time-to-time) that I totally forgot that my two-year post ablation anniversary passed twelve days ago!

The only reason I remembered now was someone emailed me today asking how long I’ve been afib-free. I looked at the calendar and it hit me! It’s been two years of total afib-freedom since my ablation (and no drugs either)!

PVCs and PACs Have Settled

One of the primary reasons my anniversary slipped by without notice is because my PVCs and PACs have settled down dramatically. When your heart is mostly calm it’s easy to forget your ablation or your past battles with afib. Missing my anniversary was a wonderful sign. It showed me that I’m normal again. My heart doesn’t rule my life and it’s awesome.

Now don’t get me wrong, I still battle PVCs and PACs from time-to-time but they aren’t nearly as bad as they used to be. What happens now is I’ll have a few bad days of PVCs and PACs followed by three weeks of total peace. Sometimes I’ll go as long as four to six weeks without any issues.

When they do occur, they aren’t as intense. And since I know they’re going to be temporary I don’t let them get me down mentally or emotionally anymore. I just tell myself that “these too shall pass” and I go on. Like clockwork they go away after a few days and I’m back to normal for a while.

For nine years the dark cloud of atrial fibrillation followed me. Every day I worried about having an episode. It was especially difficult when travelling. I never surrendered to my worry, however, as I carried on with life as normal but the fear of having an episode was always in the back of my mind.

I always thought if I had an ablation the cloud would disappear but it didn’t. Instead it changed from a very dark gray cloud to a light gray one. The cloud is still there but not nearly as ominous.

The worry now is more muted, and some would say unwarranted. The worry I have now includes thoughts such as…

Here’s the thing, I’m afib-free right now and have been for two years. I shouldn’t even have those thoughts, right? I should just be thankful and enjoy each and every day I’m blessed with afib freedom! I try to move forward with that mindset but it’s not easy.

I’ve always thought that afibbers have something in common with cancer patients when we talk about a “cure.” They say there isn’t a cure for atrial fibrillation. If our afib goes away by itself or by treatment from drugs or an ablation, we’re told we’re not cured. We’re told it can come back anytime.

Cancer is very much the same. If cancer goes away by itself or by treatment, it’s called remission and not a cure. Fortunately for many cancer patients, remission does end up being a cure as the cancer never returns.

The same holds true for afibbers. We’re not technically cured. We’re essentially in remission. Our disease may or may not come back. But fortunately for many of us a remission does mean a cure as the afib never returns!

But in that remission it’s hard not to think about your disease or worry about it coming back. I admire those people that can put it behind them and just move on and enjoy life. I will never be that person but I’m also not the type of person who is depressed or living in intense fear of their afib returning. I have moved on but I do find myself looking in the rear view mirror from time-to-time.

God Has Given Me Peace (and Hope)

As I wrote in my 2016 Year in Review post, spending more time with God has helped immensely in giving me peace with my afib and hope for the future. I pray every night that my afib will not return but if it does, I ask God to give me the strength to deal with it. And if my afib returns, I have faith in God that he’ll take care of me. He has thus far so why would He abandon me now?

Have I not commanded you? Be strong and courageous. Do not be afraid; do not be discouraged, for the Lord your God will be with you wherever you go.
-Joshua 1:9