You are here: Home / Questions and Answers / Ablation vs Drugs to Treat Atrial Fibrillation? 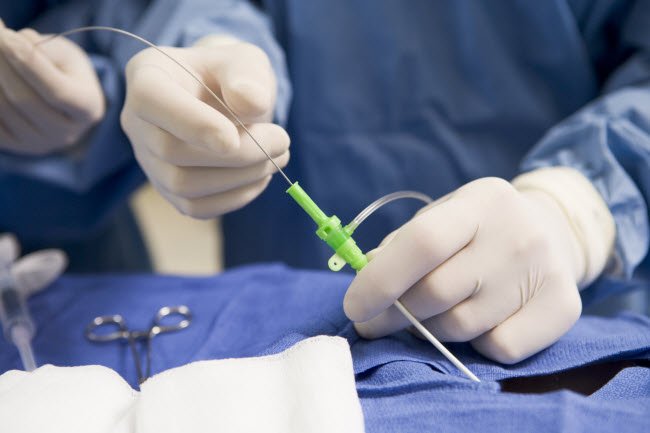 My afib episodes are being managed by 300mg of Flecainide (pill in the pocket). My EP suggested that if eventually the pill-in-the-pocket approach doesn’t work or the frequency of my afib episodes become bothersome, that the protocol is to go on a reduced daily dose of Flecainide with a beta blocker prior to considering an ablation.

Based on what I’ve read on your blog you opted for the ablation immediately. Why did you do that? Why didn’t you continue to take flecainide for a while? Is flecainide dangerous over the long term? What am I missing?

In this Q&A session I explain to Peter why I went straight to an ablation instead of relying on drugs (specifically flecainide) over the long term.

In this episode you’ll discover…

Treating Afib with Cardioconversions
I was first diagnosed with afib on Father’s Day in 2006. At the time, I thought I was having a heart attack. I got carted away to the hospital in an ambulance. That was real fun – NOT. They ultimately ended up cardioconverting me. Through the course of the next eight years I had episodes about once every year or two. Then in 2014 my episodes became more frequent. I was having episodes every month – sometimes every week. It was a nightmare.

During that eight-year period, I always treated my afib episodes with a cardioversion in the ER. Keep in mind I only had an episode once every year or two during that time so we’re only talking about four episodes. Every time I had an episode I would go to the hospital and just get cardioconverted right there on the spot. The cardioconversions weren’t a big deal and they always worked for me, but they were a major inconvenience and were very expensive.

Treating Afib with Pill-in-the-Pocket
In 2014, my EP told me about this thing called pill-in-the-pocket. I thought to myself, why didn’t someone say something about this to me in the past because it was a godsend! Just like Peter, I would take 300 mg of flecainide at the onset of an afib episode and it worked like a miracle. Every time I would take it, I would convert to normal sinus rhythm in four to six hours. It was wonderful. I no longer had to make trips to the hospital when I had an episode. Life was good.

What To Do When Atrial Fibrillation Progresses
Unfortunately, about the same time I was introduced to pill-in-the-pocket, my afib episodes became more frequent. As I’ve said in previous Q&A episodes, atrial fibrillation is very unpredictable. I wasn’t sure what was going to happen. I didn’t know if I was headed towards persistent afib or if my episodes were eventually going to calm down again.

Most people in this situation will ride it out and just see how things go. They will typically turn to drugs as a stopgap solution. That’s the route most doctors recommend. That’s why Peter said his EP said, “The protocol is once the pill-in-the-pocket doesn’t work anymore, we go to a daily smaller dose of flecainide with the beta-blocker and we kinda see how that goes. And we kinda see how frequent your episodes become and how bothersome they become. And then, if it becomes really burdensome, then we go to ablation.” That is the standard procedure just about every EP follows. My EP at the time said that to me as well. He said, “Well, at this point you’re getting episodes almost every week now. You can continue doing the pill-in-the-pocket if you want, because it obviously works for you, but I would suggest that if this continues much longer you should probably go to a smaller daily dose of flecainide.”

I wasn’t sure what I was going to do as I wanted to do more research so I could make an informed decision. As I did my research, it seemed like everything I read, whether it was a study or someone’s personal journey with afib, drugs ultimately didn’t work. I never read a success story from a drug user. All I read were these hard luck stories. People saying, “Oh, I get all these side effects, ” or “I’ve tried this drug and it doesn’t work,” or “I’ve been on this drug forever and my afib episodes are a little bit better but I have all these side effects!” Nobody was having success with drugs.

In contrast, I read a number of success stories from people who had ablations. People like Shannon Dickson, the editor of afibbers.org, was an example. He had been afib free for five or six years without taking any drugs after his second ablation. He had persistent afib going into his first ablation, and had suffered from afib for 15 years. He had a very complex difficult case of afib but despite that, after two ablations, we was afib free five or six years after his last ablation without having to take any drugs.

Steve Ryan, from a-fib.com, was another example. At the time he had been afib free for I think 12 years. He had one ablation and was afib free without any drugs going on 12 years.

Mellanie True Hills of stopafib.org was yet another example. She had been afib free at the time for five plus years or might have been seven years. She had the Cox-Maze procedure, which is a little more involved than an ablation. The point is, it was a surgical procedure, not drugs, that gave her her life back.

Then I read stories from regular people that didn’t have websites or blogs and they were talking about how great their lives were without afib after their ablations – without taking drugs either. I have a propensity not to take drugs. I just don’t like the idea of relying on drugs to treat anything. I fear the potential side effects.

Even if these drugs didn’t have side effects, the reality is even if they do work to help manage afib, for most people, not all, but for most people these drugs lose their efficacy or their effectiveness over the long term. I don’t know of anybody that says, “Well, I’ve been taking daily flecainide for 30 years and it has completely kept my afib at bay. I’ve never had an episode since I’ve been on flecainide.” You just don’t hear those stories.

Now again, I don’t wanna say… I hate to put these blanket opinions ’cause there’s gonna be some people that are out there listening and saying, “Oh hey, wait a minute, I’ve had AFib for 30 years and I’ve been taking beta-blockers and I’ve been just fine.” And again, everybody’s different and that’s the thing. For some people, maybe drugs works fine and for some of you, drugs is… You’re perfectly okay with drugs. In fact, you’re more comfortable taking drugs than you are going under the knife so to speak, although just so you know, ablation, there’s no cutting. [chuckle] They do it all through catheter so it’s not an invasive procedure at all. It’s not like open heart surgery.

Having the ablation was the best decision for me. I have been afib free now for almost three years. March 5, 2018 will mark my three year ablation anniversary. I haven’t been on any drugs, blood thinners, or anything. I have been living a totally normal life!

I will always lean towards ablations versus drugs to treat my atrial fibrillation. If my afib returns, and I completely understand that there is a chance that it will return, I won’t hesitate to go back and have a second touch-up ablation. I’ve always joked around with my wife and my friends and family that I will opt for open heart surgery if that’s what it requires to manage my afib. I will do a heart transplant surgery to treat my afib before I turn to drugs! For me, drugs are a last resort option.

Why? Because I know in most cases (not all) drugs simply won’t work over the long term and I will likely experience some side effects.

For me, I won’t take drugs unless I absolutely have to. I will always favor an ablation or a surgical procedure. At the end of the day, however, it’s a personal decision. Some people are more comfortable taking drugs while others like myself prefer surgical procedures.

Regarding Peter’s question about the long-term use of flecainide, there are certainly some potential side effects. The main issue with flecainide (and really any drug used to treat atrial fibrillation) is they tend to lose their effectiveness over time. They typically stop working at some point. I want something more sustaining and to me that’s an ablation so that’s why I went that route! Again, it’s a personal decision that every afibber needs to make.

What is your take on the ablation vs. drugs debate? Did you opt for an ablation or are you taking drugs instead to manage your afib? Do you regret your decision?