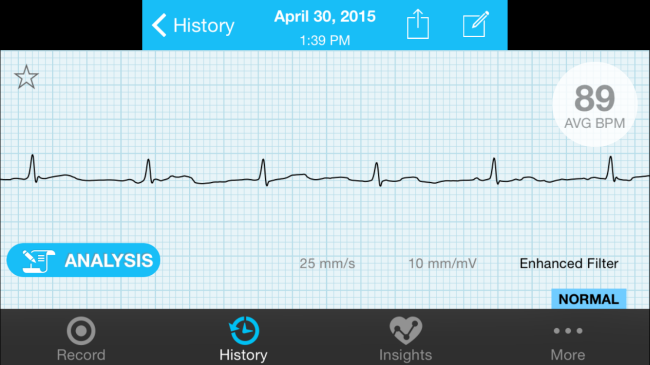 This was another great week. For starters, it was another week of total NSR and not a single heart palpitation.

I also managed to lose another pound so I’m down to 170 pounds now. I’ve lost a total of 47 pounds since August last year. When I started my weight loss journey my goal was to get to 190 pounds. I said if I could do that I’d do back flips. I thought it was going to be impossible to get to 190 pounds so I’m super stoked that I’m now at 170 pounds. Now I’m just crossing my fingers I can keep it off.

The goal now is to tweak my daily calories so I can go into maintenance mode. I really don’t want to go any lower than 170 pounds. Otherwise I’ll need to buy an entire new wardrobe – again. And I certainly don’t want to gain a bunch of weight either so this will be a work in progress.

I sent Shirley, one of Dr. Natale’s nurses, an email on Monday asking if I could stop taking Eliquis since I was going into the eighth week of the blanking period without a single heart issue. What prompted the call was I got a nose bleed “out of the blue” Monday morning. I was just doing some things around the house when suddenly my nose started bleeding. It wasn’t a horrible nose bleed but because I was on a blood thinner it took about 20 minutes for it to stop.

I have no idea if the nose bleed was a result of the Eliquis or not. What I do know is that nose bleeds can be a side effect of any blood thinner. It’s normal to have the occasional nose bleed when you’re taking an anticoagulant so I wasn’t freaking out. However, it did concern me since this was my first one since I started taking it back in February. I thought I’d reach out to Dr. Natale’s office and see if I could stop taking it.

Shirley initially responded that they usually keep their patients on a blood thinner for 3-6 months after an ablation but she would talk to Dr. Natale about it. The next day I got a phone call from her. She talked to Dr. Natale and he said I was doing so well that he didn’t see a need for me to be on Eliquis anymore. I was given the o.k. to stop!

I never really experienced any side effects with Eliquis so I don’t feel any different physically, but psychologically it just feels great to be off the medication. I was dreading being on a blood thinner for another month and possibly another four months so it was great to be able to stop after just eight weeks after the ablation.

Now that I’m completely off my blood thinner I’ve changed my supplement regimen slightly from my week one update. Here is what it looks like now:

Thorne Research Meriva Curcumin: one capsule morning, noon, and evening (500mg of curcumin per dose so 1,500mg per day)

Private-label multivitamin: one tablet in the morning and at noon (provides the basic vitamins and minerals)

Florastor Probiotic: one capsule in the morning and in the evening

Vitacost D-Ribose: 2 teaspoons, 1 teaspoon taken in the morning and ½ teaspoon at noon and in the evening (total 10,000mg of D-Ribose)

Cardiokinase Nattokinase: one softgel in the morning and evening

Vitamin C Powder: ¼ teaspoon at noon and in the evening (total 2000mg of vitamin C)

Dr. Sears Zone Omega RX: two softgels at noon (2g of fish oil) – I might be upping this to one additional softgel per day for a total of 3g of fish oil

Carlson E-Gems Elite: one softgel in the evening (400IU of vitamin E)

ReMag: 1 teaspoon in the morning, noon, and evening mixed in water (I consume about 84 ounces of water a day) – total 900mg of magnesium

ReLyte: 1/2 teaspoon in the morning, noon, and evening mixed in the magnesium water solution referenced above (this provides a solid base of all the important minerals)

Taurine Powder: 1/8 teaspoon in the morning, noon, and evening mixed in the magnesium water solution referenced above (1,500mg of taurine)

I also try to get at least 300mg of potassium with each meal. I achieve that by drinking or eating one of the following at each meal (but not always – it depends how much I eat at each meal):

If I don’t eat or drink one of those, then I’ll mix 1/2 teaspoon of Now Foods Potassium Powder with water for 270mg of potassium.

A Conversation About Flecainide with My Local EP

Last weekend I was wondering what I was supposed to do if I did have an afib episode or experienced an atrial flutter. It dawned on me that I never thought about what the game plan would be if I did have some “heart issues” during this blanking period. I sent an email to my local EP and asked him if I could still take Flecainide as a “pill in the pocket” in case I experienced afib or atrial flutter.

His response was alarming. He said my heart was different now after the ablation and it would be hard to tell how my heart would respond now to the Flecainide. He didn’t know if it would work or not. Furthermore, he wasn’t sure it would be safe to take. He told me NOT to take it at home but instead go to the hospital and take it there so I would be under supervision in case something went wrong.

I was very confused and had to read his email two or three times because it didn’t make sense. First of all, he has always been a proponent of me taking Flecainide. He was the first EP that told me I could safely take it at home the first time I took it and that he had ZERO worries about any adverse side effects. It was his extreme confidence in it that pushed me to finally try taking it at home when I had an atrial fibrillation episode instead of going to the local E.R. for an electrical cardioversion.

Also keep in mind that I did extremely well on Flecainide before the ablation. I took it many times to convert to NSR and it often worked within six hours of taking it – with ZERO side effects. How could it be possible that I would react so much different to it just because of the ablation?

Why would an ablation suddenly change everything? Based on my research, just the opposite was true – that antiarrhythmic drugs like Flecainide usually work BETTER after ablations. Something was “off” here and I was starting to panic for no reason.

To regain my sanity I reached out to my good friend, Shannon Dickson, the editor of afibbers.org (a website and forum I encourage every afibber be acquainted with). Shannon is smarter than most EPs and is a walking encyclopedia when it comes to atrial fibrillation. I knew he’d have some answers for me.

After a long phone conversation with Shannon my mind was put at ease. He too was confused and dumbfounded by my local EP’s response. He too agreed that none of it made any sense. We were both scratching our heads. Needless to say, we both agreed that by all means it would be o.k. for me to take the Flecainide if needed and if anything, it would probably work better than it did before the ablation!

Side Note: Because of this unnerving advice I got from my local EP, I will likely be looking for another EP to work with. This isn’t easy for me to say because I really like my EP and he literally changed my life, but to give me such erroneous advice has me second guessing if he’s the best EP for me.

A Conversation About Flecainide with Dr. Natale

I wanted confirmation that Flecainide would be safe to take if I had an episode so I reached out to Shirley again. She talked to Dr. Natale about it and he said he would actually prefer I don’t take Flecainide or have a cardioversion if I have an episode. He actually wants me to ride it out if I can. He said if it’s unbearable or lasts more than 24 hours, then I should contact him and we’ll go from there.

I’m not sure why he would want me to “ride it out.” I suspect he wants to do that to see how long the episode lasts. I imagine if it lasts too long (or is unbearable to handle), that might be an indication that a touch up second ablation is necessary. If it’s just a short blip or a short and bearable episode, then it’s likely just the usual short episodes that can occur in the first year after an ablation. If I immediately popped Flecainide or rushed to the E.R. for a cardioversion, they wouldn’t know if the afib was back for good or if it was just a temporary thing as a result of the heart still healing from the ablation.

I don’t know if my theory is correct or not. It’s only a guess. Of course I didn’t ask Shirley why he wanted me to do this, which in hindsight I probably should have. I could easily call her and ask but honestly I don’t really care. I’ll cross that bridge when I get there…IF I get there. Hopefully I’ll be afib free for many years to come and I won’t even have to worry about it!

Finally, this week I was able to get my RBC magnesium blood test completed. I won’t have the results for about 3 business days. I’ll post the results of the test in my next update. It should be interesting! I’m hoping the results are similar to my EXA test results (that my magnesium levels are really low).