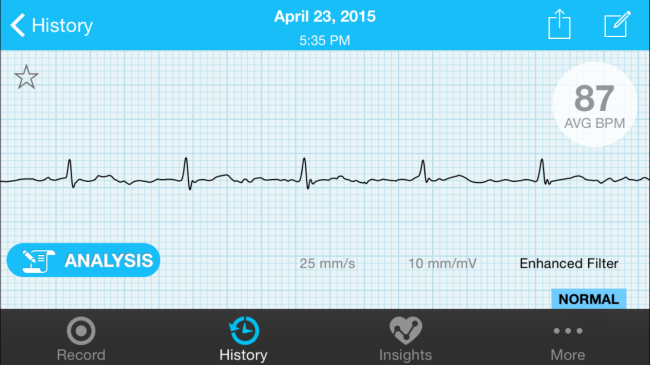 This week was quiet just like last week. I had no afib or heart palpitations of any kind. And yes, my resting heart rate continues to beat in the mid to upper 80s.

On the weight loss front I lost another pound this week so I’m down to 171 pounds now. I’ve been averaging about 1,900 calories a day so I’ll try upping my daily caloric intake slightly as I don’t really want to lose any more weight. As I’ve said before, I’m fine dipping down to 170 but I don’t want to go any lower than that.

Changes in My Daily Supplementation

I made some noticeable changes to my supplementation regime outlined in my week one update. I am no longer taking the beta-sitosterol or the curcumin. I have also stopped taking the Viva Labs Magnesium.

I stopped the beta-sitosterol and the curcumin because I was only taking them temporarily to bring down the inflammation during that first month after the ablation. Now that I’m seven weeks post ablation I don’t see a need to take them anymore.

I also stopped the Viva Labs magnesium and replaced all my magnesium supplementation with ReMag. I’m taking anywhere from 675 mg to 900 mg a day along with 1 1/2 teaspoons of ReLyte. For some reason on most days I can tolerate 900 mg of the ReMag or more but on some days I can’t so that’s why my doses have varied. However, I’m trying to keep it closer to 900 mg a day and for the most part I’ve been able to do that.

The reason I’m using ReMag exclusively over any other magnesium supplement is because ReMag is supposedly 100% absorbed where other oral supplements can’t even come close to that. I’m on a mission to increase my magnesium levels because according to my EXA test results, I’m extremely low in magnesium. This might explain why my muscles twitch periodically throughout the day and why my afib was running out of control just a few months ago!

As I mentioned in my week six update, my integrative doctor recommended IV magnesium treatments as a way to boost my levels. I thought long and hard about it but in the end I couldn’t justify spending $1,360 and countless hours every week for two months to get the treatments.

I reached out to Carolyn Dean, the author of the Magnesium Miracle and the creator of ReMag, to get her thoughts on IV magnesium. She was quick to reply that she has anecdotal evidence from her ReMag customers that the ReMag replenishes magnesium better than IV treatments!

She was also kind enough to share an ebook she put together about magnesium. You can grab a free copy of it here. Be sure to read page 57 where it talks about switching from IV magnesium to ReMag. It’s a pretty telling story about the power of ReMag magnesium.

I also reached out to my naturopathic doctor to get his input. He said IV treatments are expensive, inconvenient, and he’s not convinced they are any better than oral supplements when patients can tolerate higher doses. Since I am able to tolerate 675 – 900 mg, he recommended I stick with oral supplements for now and retest my magnesium in 3-4 months to see where things are at.

Speaking of retesting, I also made an appointment with my integrative doctor to have a RBC Magnesium test completed next week. You might be wondering why I’d do that after I just spent over $700 on the EXA test.

Alcohol & Exercise are Back in the Mix

It was my son’s 8th birthday this past week and he insisted on going to Dave & Busters with the family to celebrate. This place is basically a Chuck E. Cheese for adults. It’s a massive bar and restaurant with tons of games. The kids love this place because there are tons of games to play and they can win prizes with the tickets they get playing the games.

It was a Saturday night and all the adults at the table were having a drink of some kind and I just couldn’t resist. I ordered a margarita on the rocks and god did it taste good! I didn’t drink any more than that and that was the only alcoholic drink I had for the week. I didn’t go into afib or anything so all was well.

This week I also started going back to the gym. I’ve been doing moderate walking. I walk on a treadmill at 3.8 – 4.0 mph with a 1.5% incline for 30 minutes a day, Monday through Friday. For me, this is a very light exercise. I don’t even break a sweat but at least I’m doing something. Over time I will gradually increase the intensity and will start LIGHT weight lifting as well.

I’m still investigating the sleep study stuff as mentioned in my week six update. I called the sleep clinic to see what it would cost. I have a high deductible insurance plan so most of this will be out-of-pocket. These sleep studies aren’t cheap! They want $2,300 – $2,600 for an in-lab study or $800 – $1,000 for an in-home study. That’s crazy expensive so my research on this continues.

I’m looking into a way to do an initial test myself at home for under $250. I’ll explain that in a future post so be on the look out for that.

A Conversation with My Local EP

I also had an appointment with my local EP this week for the six-week post ablation checkup. I had a great one-hour conversation with him. He’s awesome to chat with and a great doctor. I only wish he was as experienced with ablations as Dr. Natale. He had the usual EKG done and listened to my heart and everything was perfectly normal.

He also went over my ablation report and explained to me exactly what Dr. Natale ablated. I was finally able to get a clear understanding of what exactly was burned in my heart. I never completely understood it so it was great to have everything clarified.

He also had some interesting observations while looking over the report. When he read that Dr. Natale did a “roof line and an infero-posterior line for the purpose of isolating the posterior wall of the left atrium,” he was impressed. He said that technique is incredibly difficult to do and not something he would attempt. He said if you don’t do it right it can create additional problems like atrial flutter.

He was also surprised they did a catheter entry in my neck. He said his team used to do that but they stopped because they found it was unnecessary and an additional entry point was one more thing that could go wrong.

What I took from the conversation about my ablation was that he was generally impressed at the thoroughness of Dr. Natale’s approach to ablations but he also thought Dr. Natale was a bit aggressive. He commented EPs have different philosophies, some are more conservative in their approach and some are more aggressive.

He didn’t come right out and say Dr. Natale was aggressive but based on his overall reactions and comments reading through the ablation report, he clearly feels that Dr. Natale takes an aggressive approach (which is perfectly fine with me as long as things continue to go as well as they’ve been going).

We spent the rest of our time together talking about afib in general and our philosophies on how it should be treated. I told him I was a huge proponent in changing the treatment guidelines for atrial fibrillation.

He got excited when I said that because he said he was coming around to the same belief but he was not totally there yet. He said if we kept talking he could probably be convinced – especially when you’re talking about treating “younger” patients like me. He said facing a life of drugs in your 30’s or 40’s is no way to live so if there is a way to avoid them he tends to lean towards an ablation as a first line of treatment for those patients.

Overall it was a fantastic conversation we had but it was also a bit sobering. He’s very much a realist when it comes to afib so he wouldn’t let me believe that I was totally cured and that it would be smooth sailing from here on out. He certainly hopes that’s the case but he said the most important thing I can do is enjoy being afib-free for now and live life to the fullest. Those are great words to live by (but sometimes very hard to do)!